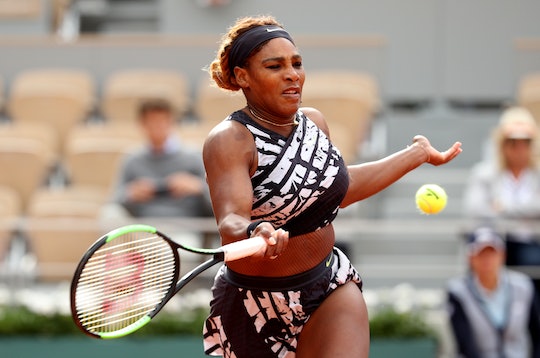 She's befriended royalty and made herself a fortune, but this athletic outlier keeps on changing the expectations in professional tennis, and isn't afraid to ruffle feathers as she does it. And while her wardrobe has raised some eyebrows before, Serena Williams' French Open outfit had everything to do with her beliefs about feminism — which is awesome.

As Page Six reported, the pro tennis player, 37, readied herself for her first match as part of the 2019 French Open in a black-and-white Nike-brand crop top, tennis skirt and jacket, subtly printed with wording. A closer inspection of her outfit revealed the printing on the champ's ensemble were the French words for “Mother, Champion, Queen, Goddess.” Incredible.

Williams has a history of challenging the wardrobe status quo in a sport that was once famous for its sedate white skirts and conservative polo shirts.

But this time around, the tennis champ's wardrobe was only created with the idea of empowering its wearer.

"Virgil Abloh designed it and so I was really excited because he's the hottest designer right now and he's amazing," Williams told the Tennis Channel, as reported by Business Insider. "And it has words in it in French. It talks about me being a mom and me being a queen, as all women are. A champion. It's positive reinforcement for me, and I kind of love that."

"[The words on the jacket] are things that mean a lot to me and reminders for me and for everyone that wants to wear it,” Williams told AP News after her match Monday. “Just remind everyone that they can be champions and are queens... It is a lot to carry, but so is being Serena Williams."

I just love the fact that Williams just doesn't back down from a fight. She feels very seriously about her feminist beliefs, and has gone to the mat for them before.

As London's Guardian newspaper reported, at last year's U.S. Open, Williams accused an umpire of sexism after she was cited for violations, accusing the tennis world of having double standards when it comes to athletic behavior according to gender.

“I definitely am a feminist. I like to stick up for women and women’s rights," Williams told London's Evening Standard newspaper in 2017, when pregnant with her daughter. Subsequently, the star named her daughter "Alexis Olympia Ohanian Jr.," as Yahoo! Finance confirmed.

The nod to baby Olympia's dad, who Yahoo! confirmed is Williams' hubby, Reddit co-founder Alexis Ohanian, is clever when you consider that a "Jr" title is typically passed from a father to a male child. “There are barriers I hope to break so my baby, whether boy or girl, won't have to live under those stipulations,” she added to the Evening Standard.

Meanwhile, Williams will continue to win matches and make some people either confused or unhappy that she doesn't just do things more quietly.

Luckily, this stance in life has also won her influential friends, including Meghan Markle, Duchess of Cambridge, who many Instagram followers think allowed the tennis pro to meet royal baby Archie recently...at least judging by Serena's gilded, Palace-y surroundings last week in a share on her social media.

So yes, I sure hope Williams will continue NOT to be perfectly meek and well-behaved. Because that kind of athlete doesn't tend to make history. Just take a look at her wardrobe if you don't know what I mean.