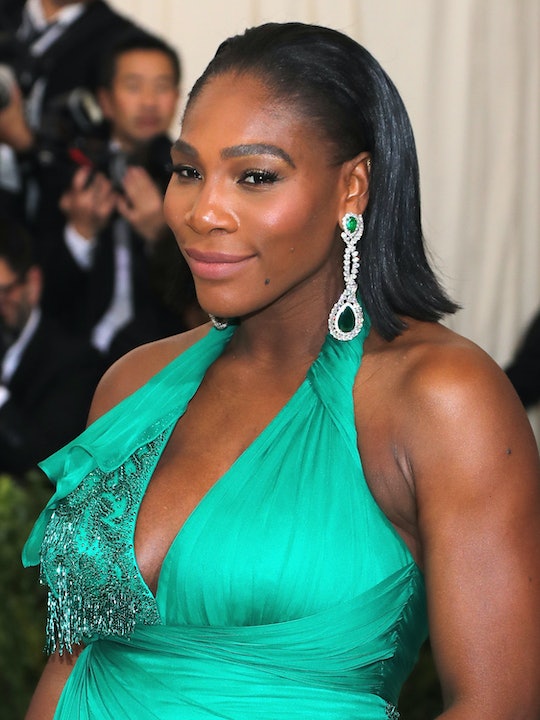 It's difficult to argue against the idea that Serena Williams is one bad*** mama. (I mean, she did win the Australian Open last year while pregnant!) More recently, though, the 23-major-title-owning tennis pro opened up about the terrifying health complications she faced during and after the delivery of her daughter. The new mom and her little girl, Alexis Olympia Ohanian Jr., were featured on the cover of Vogue last week, where the details of her childbirth-related medical issues were revealed. And honestly, Serena Williams' harrowing birth story sheds light on a much-needed discussion on maternal health.

As revealed in Vogue's cover story, little Olympia was born via emergency C-section on Sept. 1 when her heart rate dropped drastically during labor contractions. Although everything went smoothly with the delivery itself, Williams started feeling short of breath the next day. Since the tennis star has a history of blood clots, she pretty much knew what was up: She was facing another pulmonary embolism. While gasping for air, Williams told a nurse that she needed a CT scan with contrast and IV heparin (which is a blood thinner) ASAP. The nurse thought the new mom's pain medication might have been making her a bit confused and soon, a doctor was performing an ultrasound on Williams' legs. “I was like, a Doppler? I told you, I need a CT scan and a heparin drip,” Williams told her care team, according to Vogue. When the ultrasound didn't reveal what was causing her symptoms, Williams was sent for a CT — which revealed small blood clots that had settled in her lungs. And guess what? She was immediately put on a heparin drip.

In the days that followed, Williams faced even more complications, as Vogue reported. Like when her C-section wound popped open from the coughing that was caused by her pulmonary embolism. Or, when she returned to surgery in order to re-close her C-section wound, and doctors found that a large hematoma flooded her abdomen. Williams then had a filter inserted into a major vein to prevent more clots from winding up in her lungs. Sheesh. Talk about a jarring first few days of motherhood.

On Monday, E! News reported that Williams took to Facebook to again address her childbirth complications — as well as the awareness her experience seems to have sparked. "I didn’t expect that sharing our family’s story of Olympia’s birth and all of complications after giving birth would start such an outpouring of discussion from women — especially black women — who have faced similar complications and women whose problems go unaddressed," Williams wrote, also sharing an adorable video of baby Olympia.

The tennis star went on to point out a disturbing statistic from the Centers for Disease Control and Prevention (CDC): Black women are more than three times more likely than white women to die from pregnancy- or childbirth-related causes. Williams continued:

We have a lot of work to do as a nation and I hope my story can inspire a conversation that gets us to close this gap.

Williams clarified that every woman deserves to have a healthy pregnancy and childbirth — regardless of her race or background. "My personal experience was not great but it was MY experience and I'm happy it happened to me," she wrote. "It made me stronger and it made me appreciate women — both women with and without kids — even more. We are powerful!!!" Williams added:

I want to thank all of you who have opened up through online comments and other platforms to tell your story. I encourage you to continue to tell those stories. This helps. We can help others. Our voices are our power.

Williams' story is undoubtedly scary. And I can't help but wonder why the new mom's medical team didn't take her known history of blood clots into consideration when she was asking for the treatment she needed. It's completely unacceptable that black mothers are three times as likely to die from labor/childbirth complications than white women. Three times! Williams' childbirth experience — and the overwhelming response it has attracted — serves as a jolting wake-up call about the state of maternal health in the United States. It's fantastic that Williams is using her platform to shed a light on this important issue. Because we owe it to our nation's mothers, along with their children and families, to do so much better.