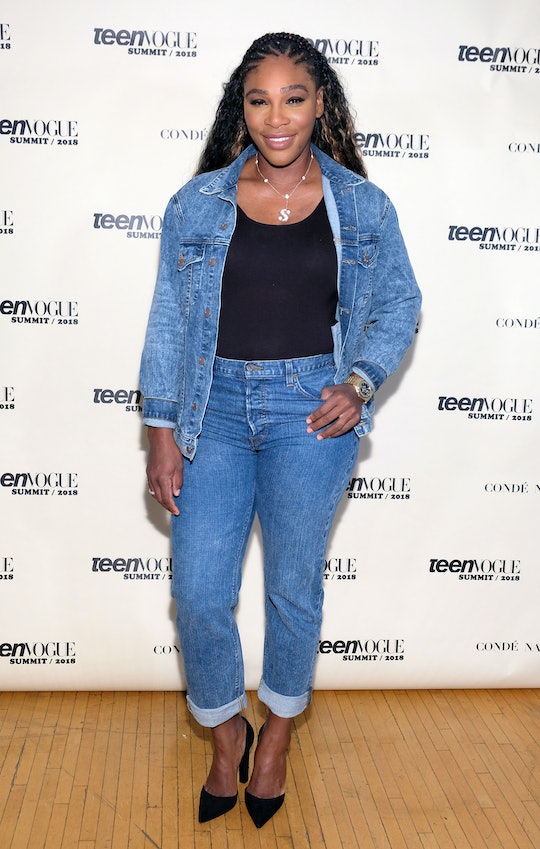 Serena Williams has a lot to celebrate. Just a few months ago, she celebrated her sweet daughter Alexis Olympia's first birthday. And just last week she opened the doors of her Los Angeles pop-up shop for her Serena clothing line. So how do those two momentous life moments come together? It's all about the shoes, baby. Serena Williams is saving her shoes for this very sweet reason.

Little Alexis Olympia isn't even walking yet, but that hasn't stopped her mom from saving a ton of shoes for her daughter. That's right, Williams' entire shoe collection will go to Alexis one day, as People reported.

“We don’t make shoes yet in the collection but my whole shoe closet is for her and that’s why I buy so many,” Williams told People at the grand opening of her Los Angeles pop-up shop.

And judging by William's flawless style aesthetic, these shoes are probably drool-worthy.

In May, Williams, 37, launched her highly-anticipated clothing line, giving fans a little bit of everything (athleisure, party wear, on-point trends) with a whole lot of her patented brand of style, according to Harper's Bazaar UK. But her biggest hope for the line was something William seems to celebrate everyday, not only with her daughter, but with fans as well.

"The customer is a girl or a woman who believes in herself, or wants to believe in herself; maybe she’s feeling unconfident that day," Williams told WWD. "And someone that is unapologetically themselves, and that maybe they stand out; maybe they stand out because they are strong or they’re beautiful or they want to not be the norm. Our woman is someone who looks at fashion as a compass to show who they are, to show what they are."

But she's not stopping at shoes. Williams plans to save a few of her favorite designs for her daughter to wear later on as well.

So what is she saving for her little one? The I Am Beautiful, I Am Strong pink sweater in the collection, for one. "I'm definitely saving that for her," Williams told People.

Being a mom to Alexis Olympia might just be one of Williams' greatest accomplishments, as The Root reported the athlete and designer told the audience at the 2018 Teen Vogue Summit.

I just love what I do. Mostly I love being a full-time mom. I’ve been with her every day of her life. I haven’t missed a day ... I never thought I would be the mom that would be so hands on. I always thought I would do this or I would do that. My life is built around my daughter now. And I love that.

This is the first child for Williams and husband Alexis Ohanian. The two married in New Orleans just a few months after the birth of their baby girl, according to Essence.

Shoes? Check. Clothes? Check. Looks like Alexis Olympia has a very fashionable future ahead of her. And if any mom is going to curate her child's future shoe closet, Williams is definitely up there on the list (lucky Alexis Olympia). All you have to do is look at her on and off the court style to know she has a real talent when it comes to fashion that is only rivaled by her serious athletic ability.

Fans can't wait to see Serena continue to blossom as a mom. Here's hoping that it all plays out over Instagram so everyone can see Alexis Olympia grow up over the years — no doubt in high fashion.