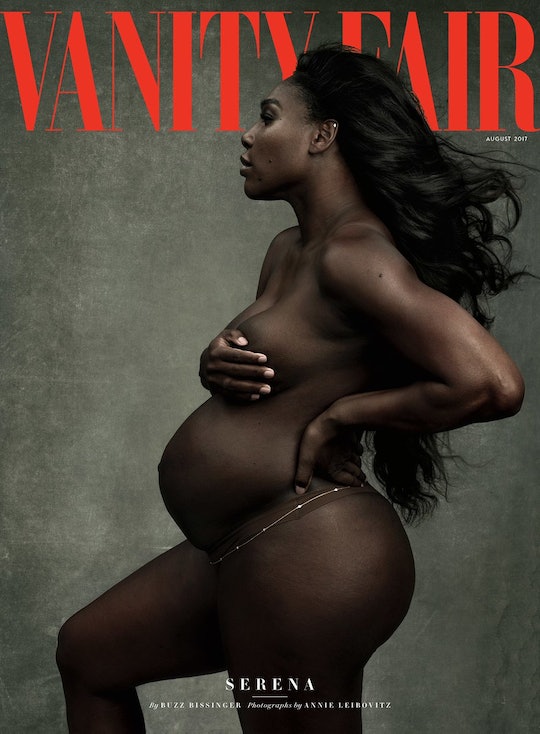 Earlier this week, photos of a pregnant Serena Williams posing nude for Vanity Fair hit the internet. In the photos, which were taken by famed photographer Annie Leibovitz, Williams wears nothing but what appears to be a nude thong draped with a simple waist chain. With one arm covering her bare breasts, Williams' other arm is flexed, showcasing the physical strength required for her to be considered one of the world’s greatest athletes.

Given how much controversy Williams has attracted over the course of her career, it was inevitable that haters would come out of the woodwork — and of course, they did. On Wednesday, Washington Post writer Robin Givhan wrote an op-ed about how Williams' nude maternity photos were gratuitous, serving no purpose other than to make celebrity pregnancy seem like a performance.

Celebrity nude photos, Givhan argued, “can help destigmatize illnesses or normalize what at first seems disconcertingly unfamiliar. But what is the broader value of the bared baby bump?” Givhan's analysis failed to recognize that in the context of the magazine's history, as well as American pop culture at large, Williams' nude maternity photos did have a "broader value": they served to de-stigmatize and normalize cultural perceptions of black beauty, pregnancy, and motherhood.

Vanity Fair has a complex history with women of color. In 2010, the magazine drew flak for its "Young Hollywood" issue, which featured only thin white female actors on the cover, and until 2013, when Vanity Fair featured Scandal star Kerry Washington, the magazine had not featured a black woman on the cover in a decade.

By representing a darker-skinned black woman like Williams as beautiful and feminine, the magazine took a positive step toward embracing black beauty over Eurocentric ideals.

Representation matters, and every time a beauty or lifestyle magazine like Vanity Fair fails to recognize black women, they are implicitly sending a message that black is not beautiful. The result is that little black girls with darker skin rarely see themselves represented as feminine, beautiful, and worthy of love. Numerous studies have supported this conclusion, with one 2013 academic review reporting that pervasive white beauty standards in the media can result in black women, particularly dark-skinned black women, "internaliz[ing] self-hatred."

By featuring Williams on the cover, Vanity Fair appears to be attempting to right its past wrongs. By representing a darker-skinned black woman like Williams as beautiful and feminine, the magazine took a positive step toward embracing black beauty over Eurocentric ideals — and that in itself is significant.

The article that accompanies Williams' photos is also significant. Written by Buzz Bissinger, the piece recounts how Williams met fiance Alexis Ohanian in 2015 at a hotel in Rome. As Serena sat poolside with friends waiting for breakfast, Ohanian sat at a nearby table, where they struck up conversation about rats and Reddit. A little more than a year later, he proposed to her at the same table in the same hotel in Rome, and they are now expecting a baby together.

This tale is a far cry from our cultural stereotypes of black pregnant woman, who are typically viewed as impoverished single mothers-to-be who were abandoned by their partners. Historically, black pregnancy has been viewed as a blight on society, as evidenced by Ronald Reagan's infamous "welfare queen" trope. Viewed in this light, Williams' celebration of her own pregnancy is empowering, and her love story with Ohanian is a welcome departure from the single "baby mama" narrative of black motherhood.

Let's hope that this media representation of joyful Black motherhood and pregnancy is just the first of many more to come.

Givhan might believe that Williams' photos don't have any broad social value. But by showing a black woman reveling in and celebrating her pregnancy, Vanity Fair is normalizing black pregnancy and motherhood, and helping break down barriers for black women to unapologetically bare their skin and their round, pregnant bellies. And because the photos feature Williams, a black woman who has been subject to body-shaming and is frequently referred to as masculine, they take on an added significance, because they show her confident, strong, and feminine. And that deserves our attention.

The headline for Givhan's piece is "Let Serena Williams' naked photo shoot be the last of its kind." But let's hope that this media representation of joyful Black motherhood and pregnancy is just the first of many more to come.

More Like This
7 Baby Name Generators To Try
Festive Mommy & Me Holiday Nail Ideas To Try
The “Tripledemic” Is Scary, But I Feel Less Helpless When I Wear A Mask
101 Advent Calendar Activities, From Books To Read To Cookies To Bake