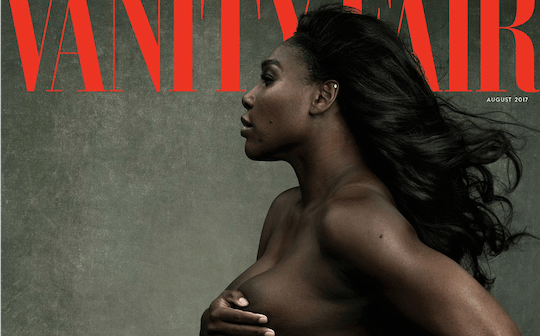 Why Serena Williams' Nude Pregnancy Photos Are So Important

On the surface, there’s nothing revolutionary about Serena Williams’ Vanity Fair cover for the August 2017 issue, in which she flaunts her burgeoning baby bump in an effortlessly stunning nude photo. Demi Moore struck a similar pose on Vanity Fair’s iconic August 1991 cover. Cindy Crawford, Britney Spears, Brooke Shields, Christina Aguilera, Miranda Kerr, and several other white female celebrities have flaunted their bare pregnant bodies on magazine covers. Halle Berry also posed while pregnant for InStyle’s cover in 2008, but she wasn't nude — instead, she wore a beautiful white dress that hugged her belly without revealing it.

Yet Williams' Vanity Fair photos are significant: by posing nude while pregnant, she’s disrupting the whiteness of the celebrity nude maternity photo shoot trope by turning the camera’s gaze on her black pregnant body. It's a move reminiscent of her friend Beyoncé’s pregnancy announcement, which was also hailed as a powerful symbol of black motherhood. Williams' photo shoot is an effort to link the beauty of pregnancy with blackness, something that has eluded black women from the beginning of time.

In the images, which were released earlier today, Williams is depicted in profile, her gaze focused on the future, her hands covering her bare breasts and her skin enviably glowing. She almost looks like a Renaissance painting of the pregnant Virgin Mary, and that's likely intentional: in art history, pregnancy is frequently associated with the religious image of the Virgin Mary. As University of Sheffield professor Katie Edwards explained in an essay about Beyoncé's maternity photos for The Conversation, the Virgin Mary is the epitome of femininity, holiness, and innocence, so she has typically been portrayed as a pregnant white woman.

In a world where Black mothers are constructed as hypersexual jezebels, state-dependent welfare queens, and myriad other stereotypes that strip us of our humanity, Williams' pregnancy, rooted in love and happiness, is a welcome and necessary representation.

“Images of the Virgin Mary are central to Western culture as a symbol of ideal femininity that equates whiteness with beauty, purity and virtue, and artistic representations of the Mother of Christ have helped to define how women are publicly represented,” Edwards wrote.

Vanity Fair didn’t run a standard profile of Williams: Instead, it chronicled her relationship with her fiancé, Reddit co-founder Alexis Ohanian, from their fateful meeting to their engagement to their unplanned pregnancy. The piece makes it clear that Williams is happy with her fiancé, thrilled to be having a baby at 35, and perfectly OK with balancing her career and motherhood. It’s a complete departure from how black women’s pregnancies are often represented.

In a world where Black mothers are constructed as hypersexual jezebels, state-dependent welfare queens, and myriad other stereotypes that strip us of our humanity, Serena’s pregnancy, rooted in love and happiness, is a welcome and necessary representation. She appears feminine, gentle, and soft, qualities that are rarely seen in our culture's depictions of black women, let alone black pregnant women.

The Vanity Fair cover is also significant because Williams has been derided for her physique, over and over again. In 2014, a Russian tennis official called Serena and Venus “the Williams brothers.” She’s been snidely referred to as a “gorilla” and a “savage,” told that she has an unfair advantage over white tennis players because of her muscular build, and mocked by other tennis players, including Caroline Wozniacki, who famously stuffed her outfit to caricature her body. The weaponized critiques are designed to undermine Williams's dominance of her sport.

She loves every muscle, every curve, every aspect of her protruding stomach. She loves her blackness and her womanhood, and she has no qualms about baring it all for a magazine cover.

“This goes beyond Williams’ body. Not only is her womanhood consistently denied, her character is deemed as dominant, aggressive and arrogant," the Huffington Post's Zeba Blay wrote in 2015. “Everything from her hairstyles to her celebratory dances have been regarded as “ghetto” or uncouth. No matter her success, her intelligence or her graciousness, her humanity is consistently denied.”

Ultimately, the Vanity Fair cover is a reclamation of Williams' beauty and humanity. For Williams to reclaim her body by unabashedly posing naked is a powerful retort to the racist critiques. No matter what’s been said about her body, she loves it. She loves every muscle, every curve, every aspect of her protruding stomach. She loves her blackness and her womanhood, and she has no qualms about baring it all for a magazine cover. White women might be the default in pregnancy narratives, but Serena Williams is intent on disrupting that.