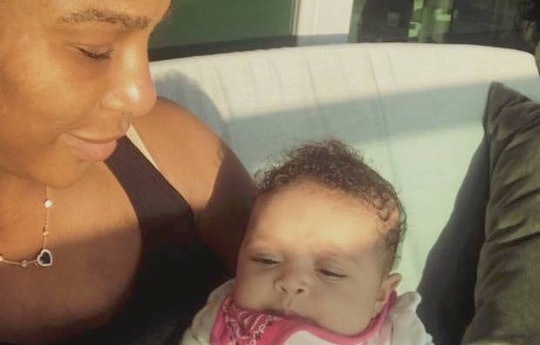 They say that motherhood changes a woman in more ways than one. Women notice the changes in their physical appearance, their personality, and the way they interact with others. Celebrities are not immune to these changes (really, they're just like everyone else). Tennis super star Serena Williams recently became a mother for the first time, to her daughter named Alexis Olympia Ohanian Jr. in September, with husband Alexis Ohanian. And in a recent interview with Vogue, Williams revealed how Olympia helps her mental health, proving that motherhood is truly a powerful thing.

Williams is considered to be one of the greatest tennis players of all time with the accomplishments to show for it. Williams, according to CNN, has won "72 career singles titles, 23 doubles titles, and two mixed doubles titles" in addition to winning more career prize money than any other female athlete, ever. Needless to say, she's a pretty big deal. But even some of the world's best athletes get anxiety before and during their big matches. Williams has admitted to being stressed during her games in the past to ESPN, and told reporters in 2013 that overcoming her anxiety was her key to winning the French Open. And in 2011, Williams told The Telegraph that she battled depression after an injury left her sidelined on the tennis courts.

But Williams said in her interview with Vogue that her daughter has helped with her mental health. (And if you saw how cute Olympia is, then you too, would understand why she has helped Williams.)

Williams explained to Vogue just how her daughter helped her overcome her anxiety and therefore could help her win more titles:

When I'm too anxious I lose matches, and I feel like a lot of anxiety disappeared when Olympia was born. Knowing I've got this beautiful baby to go home to makes me feel like I don't have to play another match. I don't need the money or the titles or the prestige. I want them, but don't need them. That's a different feeling for me.

Williams admitted in the same interview that she would give up her career just to spend all of her time with her daughter until she is 18. But the desire to win and break more records is too strong for Williams, who, according to Vogue, is well on her way to breaking the record for the most Grand Slams held by a tennis player and would "make her the undisputed greatest of all time."

This quote might be surprising to hear for tennis fans who watched Williams lose her first match after she returned to tennis for the first time in December a few months after giving birth. But Williams didn't let this loss faze her, telling reporters, according to USA Today:

I have plenty of comebacks, from injuries, from surgeries, but I've never had a comeback after actually giving birth to a human being. So, in my eyes, I feel like it was a wonderful, wonderful match for me.

Talk about one incredibly empowering mother.

But regardless of her many wins or her recent loss, Williams told Vogue that she wouldn't let her losses or her desire to do more limit her, and that she would teach those same things to her daughter:

I think sometimes women limit themselves. I'm not sure why we think that way, but I know that we're sometimes taught not to dream as big as men, not to believe we can't be a president or a CEO, when in the same household, a male child is told he can be anything he wants. I'm so glad I had a daughter. I want to teach her that there are no limits.

You can just tell that Williams is so happy to be a mom, and every interview and new photo on Instagram or Snapchat makes it even more obvious.

More Like This
Serena Williams Shares How Her Daughter Comforted Her After Losing A Big Match
Exclusive: Watch Hayden Panettiere Talk About Addiction Treatment 4 Months Postpartum
George Clooney Really Regrets Having His Twins Learn A Language He Doesn't Speak
Khloé Kardashian Reveals Tristan Thompson Proposed To Her Last Year & Why She Said No