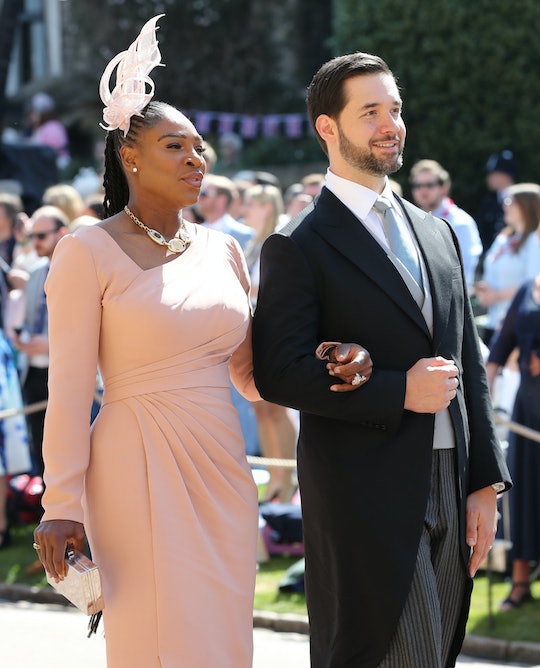 One of Prince Harry and Meghan Markle's most esteemed wedding guests isn't a European royal — it's tennis superstar and recent maternal mortality activist Serena Williams. She attended the nuptials with her husband Alexis Ohanian in tow, but baby Alexis Olympia Ohanian Jr. saw her parents off in style and Serena Williams' royal wedding family photo is to die for.

Although Baby Alexis kept it cozy in a comfy-looking grey onesie and shorts, she did accessorize with a pale pink Burberry quilted jacket to dress up her look with a nod to British fashion. It also coordinated nicely with her mom's dusty rose Versace dress and strikingly tall fascinator. Williams also wore pink pumps to match her dress and hat, and a Bulgari statement necklace. But her favorite element of the look was very clear from her Instagram story. According to Huffington Post, she can be heard saying, "Look at my braids, I’m wearing braids! Yas!" When Prince Harry and Meghan Markle first announced their engagement, marking the first time a black woman would marry into the royal family in the modern era, Twitter immediately lit up in eager anticipation of an unapologetic celebration of blackness. And Williams' braids reflect the proud ownership of black identity which Markle represents.

As a close friend of the bride, Williams and her husband were seated in a place of honor at St George's Chapel for the wedding ceremony itself. Harry and Meghan tied the knot at the altar, which is located at the innermost part of the chapel, in a section closed off from the larger congregation. It's called the Quire, and it's where the closest friends and family members of bride and groom were seated. The Quire is split down the middle by the aisle and congregants here sit in front of the coat of arms flags facing the center of the room with the altar at the front.

Also in this area are Queen Elizabeth, Prince Phillip, and other members of the royal family. Traditionally, the royals sit on the right side while the family of the bride would have sat on the left. But since Markle's mother was the only person from her family who attended the ceremony, she had plenty of space for close friends in her section of the Quire. Keeping Williams and Ohanian company on Markle's side were George and Amal Clooney, Oprah Winfrey, and her best friend, stylist Jessica Mulroney. (Mulroney's two sons participated in the wedding as page boys, as well.)

The bulk of wedding ceremony attendees sat in the Nave, which is the outer section of the chapel and blocked off from the Quire. Around 800 people were seated there in rows and they had screens in their section through which they were able to view the ceremony inside the Quire.

According to BBC America, Williams and Markle shared one unique wedding ceremony struggle: both of their fathers pulled out of attending their weddings at the last minute, leaving the brides without a traditional figure to give them away. Williams opted to walk herself down the aisle, while Prince Charles stood in for Meghan's father and met her at the entrance to the Quire to walk her the rest of the way up to the altar. Given the fraught family dynamics which plagued Markle throughout wedding planning, it was probably really helpful to have someone who understood what she was dealing with close at hand during the ceremony. Even though her family was being super messy, Markle received an outpouring of sympathy from most fans, which was heartening to see. Ultimately, she was surrounded by the truly loving and supportive people in her life on her wedding day — and it doesn't matter that they weren't relatives.