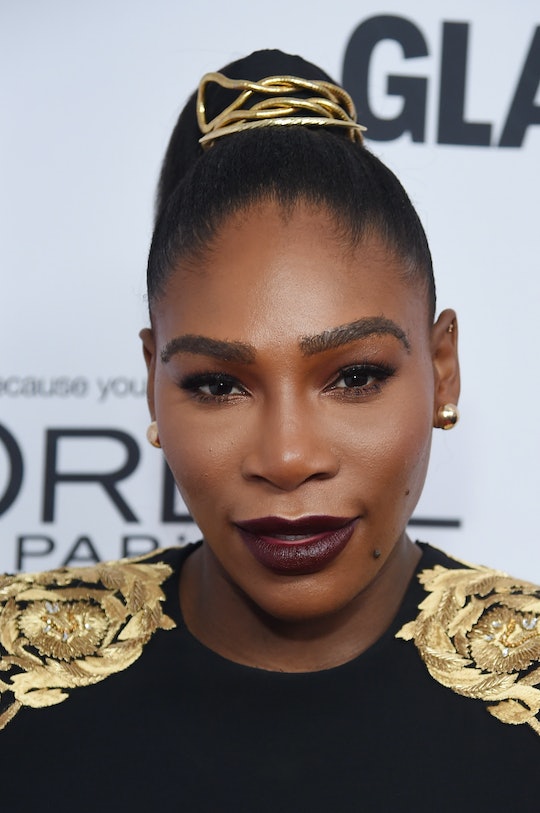 Serena Williams Was "Devastated" By Her C-Section, & Her Story Is All Too Common Among Moms

Last September, Serena Williams and now-husband Alexis Ohanian welcomed their first daughter, Alexis Olympia together. Though the happy family of three are healthy and settling into their new life now, William's labor and delivery story is a cautionary tale about just how unpredictable and potentially dangerous giving birth can be. In a recent interview, Serena Williams says she was "devastated" by her C-section, and dealt with days of life-threatening postpartum complications after her daughter was born.

In a new interview with People, Williams opened up about what happened last fall. “[It] felt like yesterday the doctor walked in, she looked at me and she said, ‘Alright, we’re gonna have to give you a C-section,’” she said, after learning that her daughter's heart rate was dropping. “I was like, ‘Alright, cool.’ And I didn’t flinch. There was a weird sense in me [that] knew that I was going to have to have a C-section, so I wasn’t too surprised even though I didn’t want it.”

She said it was "devastating," and that part of her really wanted to be able to give birth naturally. On top of that, she was wary about scarring. However, all of that subsided once her daughter arrived. “Once she was okay, everything for me was okay,” she said, “Even though everything wasn’t okay.”

Williams is referring, of course, to the series of life-threatening complications that she experienced post-delivery. In an interview with Vogue, Williams explained what happened: while recovering, she began to have trouble breathing. Given that she has a history of blood clots (and was off of her medication due to the surgery) she knew what was wrong, and told the doctors she needed a CT scan with contrast and an IV of heparin (a blood thinner) immediately. Williams was correct: she was experiencing several blood clots in her lungs.

However, her health issues were far from resolved. From there, her C-section wound opened from the coughing, and when she went back into surgery to have it closed it again, doctors found a large hematoma (an abnormal collection of blood outside of a blood vessel) in her abdomen. Afterwards, she had another surgery to have a filter inserted into one of her veins. By the time she got home, she was stuck in bed for the first weeks of her daughter's life. She told Vogue:

Sometimes I get really down and feel like, man, I can’t do this. No one talks about the low moments — the pressure you feel, the incredible letdown every time you hear the baby cry. I’ve broken down I don’t know how many times. Or I’ll get angry about the crying, then sad about being angry, and then guilty, like, Why do I feel so sad when I have a beautiful baby? The emotions are insane.

In an interview with The Guardian, Williams opened up about wanting to advocate for maternal health, particularly for women of color. "Black women in the United States are over three times more likely to die from pregnancy or childbirth-related causes," she said.

But this is not just a challenge in the United States. Around the world, thousands of women struggle to give birth in the poorest countries. When they have complications like mine, there are often no drugs, health facilities or doctors to save them. If they don’t want to give birth at home, they have to travel great distances at the height of pregnancy.

CNN reported that "childbirth is killing black women," citing the general differences between overall health and chronic illnesses between races (rates of obesity and high blood pressure, aka, risk factors for pregnancy complications, tend to be higher in black women). However, CNN also noted "socioeconomic status, access to health care, education, insurance coverage, housing, levels of stress and community health among black and white women, including even implicit bias and variations in the ways in which health care is delivered to black versus white women" could all be playing a role as well.

Williams' story is an important one for more reasons than one. Delivery is unpredictable, it's serious, and the fact that it is disproportionately impacting one community over another is something women like her are advocating to resolve.