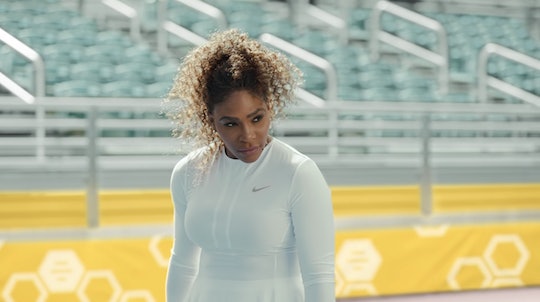 Super Bowl LIII may be an important event for football fans, but for those of us not *particularly* interested in sports, at least there are the commercials. And while, most often, companies bring out their funniest offerings to play during the big game, social networking app Bumble has chosen instead to make its first Super Bowl ad all about empowerment — and they couldn't have chosen a better spokesperson to help them do it. Serena Williams' Super Bowl commercial encourages women to make the first move in their careers, their relationships, and their friendships, and if there's anyone who knows how to do that, it has to be the tennis superstar.

Bumble recently released the commercial, aptly entitled, "The Ball Is In Her Court," according to The Chicago Tribune, and it's a pretty appropriate message for the app, which not only offers women the chance to match with potential love interests, but also with those looking to make new friends, and network for business purposes.

In the ad, Williams reflects on the idea that though "the world tells [women] to wait," it's really going after what you want and being proactive that will let you end up where you really want to be. Williams' most important advice though? While preparing to launch a serve on a colourful, Bumble-themed tennis court, Williams said, "don't wait to be given power. Because here's what they won't tell you: we already have it."

As inspiring a reminder as that is, it's even more remarkable when you consider how rare it is for a Super Bowl commercial to be aimed exclusively at women. In fact, according to Ad Age, the spot wasn't just targeted at women, it was designed by women, too. The agency behind the commercial is female-led agency, FlyteVu, and Bumble itself is a company created and led by a woman, CEO Whitney Wolfe Herd. What's more, is that Williams didn't just star in the commercial, she also served as co-creator, and as the athlete explained to Ad Age, it was important to her that it be done right. She said,

But while the ad makes a good case for why women should be unapologetic about pursuing their career goals, Williams told People that Bumble's emphasis on creating friendships and platonic female relationships is just as important as networking for business. That's because, while friendships aren't necessarily often considered a goal, having good people in your corner is so important when it comes to pursuing your dreams. Williams said,

Personal relationships are really important because they ground you. They center you. I'm really close to my mom and my family and my sisters. They are always there for me and they always make sure that I stay grounded and they make sure I know what’s important.

As much as the commercial is by women, for women, though, Wolfe Herd told Ad Age that, as far as she was concerned, the spot was just as much for men — particularly those with young girls in their lives who deserve to know how awesome they are. She explained,

I want fathers to share it with their daughters; brothers to send it to their sisters; and I want little girls around the world to feel like they could be that little girl on that court, just pick up the ball whatever that is, whatever that metaphor is in your life.

So while the majority of Super Bowl ads might be from huge multinational companies trying to get sports fans to chuckle, Bumble and Williams are clearly aiming to do something a bit different by amplifying a badass message about women taking the lead in their own lives. And while it's obviously meant to be a vehicle to promote the Bumble app specifically, Williams' ad is a refreshing reminder to everyone that women can, and should, go after whatever they want, without hesitation or apology.