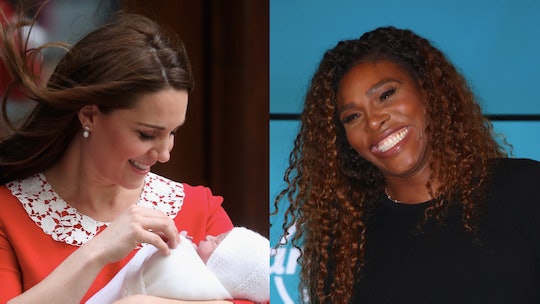 If anyone were asked to name the most amazing women out there, most people would have Serena Williams near the top of the list. But even the accomplished and unstoppable tennis champion has other badass women she looks up to and admires. In fact, in a recent interview with InStyle, Serena Williams said she thinks Kate Middleton is number one among her own list of badass women she's inspired by.

Williams spoke to the magazine for its upcoming Badass Women issue in a revealing interview that covered everything from motherhood to self-confidence. (My favorite moment: Williams was eating a combo plate of crab and cake during the chat.) When she was asked to name the women she thinks embody the badass ethos, she didn’t have to think too hard.

“Obviously Beyonce. That goes unsaid. Rihanna goes unsaid. Kate Middleton!” the Grand Slam champion told InStyle. The reason behind Williams’ choice is one that many people have commented on — Middleton's stunning appearance on the hospital steps just seven hours after giving birth — in heels — as the Boston Globe pointed out.

“Can you imagine having a baby and then, right after, you put on makeup and go out to greet the public?” Laura Brown, InStyle's editor in chief, asked Williams. “No. And she was … standing!” Williams replied. When Brown pointed her fear that something would “go … awry,” Williams remarked: “Me too! So she’s officially No. 1.”

Williams knows whereof she speaks. She gave birth to her first child, a daughter named Alexis Olympia, in September 2017, according to People. But being a mom hasn’t stopped her from taking on the world both on and off the court. She earned rave reviews for her always iconic fashion sense just a few weeks ago when she arrived at the reception for the royal wedding in a stunning Valentino dress and sneakers, according to Harper’s Bazaar. As one of Meghan Markle’s closest friends, Williams and her husband, Reddit founder Alexis Ohanian, were among the privileged few who sat in the Quire section of the chapel, able to view the wedding along with family members, Harper’s Bazaar noted.

Despite the new mom’s seemingly fearless approach to life, she revealed that her little girl is the thing that makes her most nervous off the court. Expressing the feelings of new moms everywhere, she explained to InStyle of what she's thinking:

What is she doing? Did she fall? Did she sit? Even when she crawls I shadow her so she doesn’t hit her head. I have a padded floor —everything makes me nervous about her. Is she in the car? Who’s driving? Why am I not driving? I want total control.

She even battled those protective mother feelings during her pregnancy, as she discovered she was expecting while in the middle of playing the Australian Open, according to CNN. She asked her doctor if she needed to pull out of the tournament and received the all clear to compete, an experience she described to InStyle as “a dream” and an “animated Disney movie.” She went on to win the Open, as CNN reported.

When asked what advice she would give about being badass woman, Williams mused on the value of self-knowledge and self-assurance. “Someone who’s a badass is incredibly confident and unapologetically herself. And she doesn’t care what anyone else says – but in a positive, not a negative way,” she told InStyle.

That’s a perspective that has been hard-earned, as William’s has faced continual criticism of her body, her skills, and her skin color, according to TIME. Just one example of the ugliness appeared with the cover of her Sportsperson of the Year award from Sports Illustrated magazine, where she showed off her body in a lace bodysuit and stilletos. Some journalists harshly critiqued everything from her facial expression to her clothing, according to the Independent.

Women — and to be fair, many men, too — everywhere appreciate Williams’ example of strength and grace in the face of adversity. She takes the haters on with the same confidence she encourages and, for that reason, is someone, along with Kate Middleton, the rest of us consider as our number one.