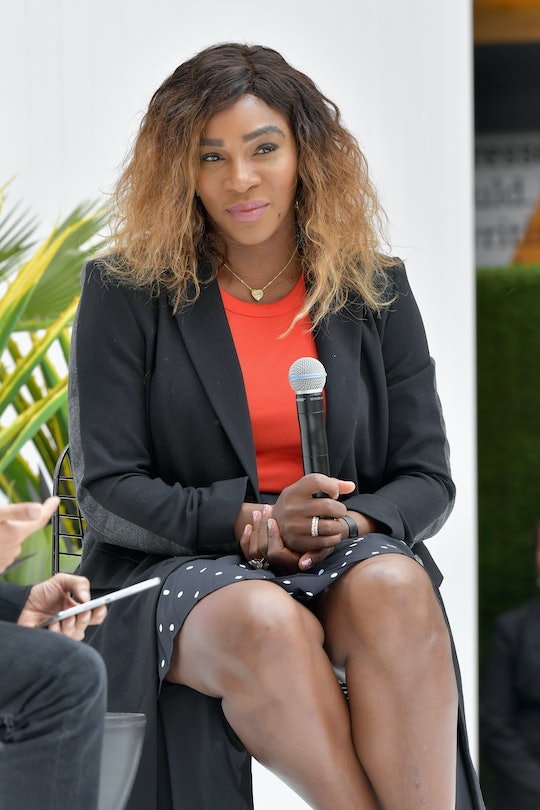 Long before your baby is even born, friends, family, and complete strangers are eager to dole out parenting advice. "Sleep now while you can!" they say. From listing the food you should avoid to singing the praises of cloth diapers, everyone has an opinion, and it doesn't seem to get any better once that baby is born. So, the fact that Serena Williams won't give Meghan Markle parenting advice right now is definitely a breath of fresh air.

Before I jump ahead, however, let me catch you up to speed about the 23-time grand slam champion and the Duchess of Sussex, who have been friends ever since they met at the Super Bowl in 2010, according to POPSUGAR. Williams attended the royal wedding of Markle and Prince Harry in May 2018, and then helped plan Markle's New York City baby shower. Likewise, the former actress frequently attends Williams' matches at the U.S. Open and Wimbledon. It's a supportive friendship, for sure.

With this in mind, it wouldn't be too surprising for Williams — who shares a 1-year-old daughter, Alexis Olympia, with husband Alexis Ohanian — to pass along tidbits of parenting wisdom to new mom Markle. But apparently, that's not how Williams rolls.

During a recent sit-down with BBC's Sally Nugent, Williams dished on tennis, motherhood, and the legacy she hopes to leave behind. The tennis star also fielded a question about whether she has given any parenting advice to Meghan Markle. "I never pass on words of wisdom, because I feel like everyone when they have a kid, especially when you just have a baby, it's so difficult to just be," Williams answered.

She continued, "It's just like, get through the first three months, four months, and then we can talk."

Honestly, Williams' approach makes complete sense. Speaking from personal experience, those first few months are all about survival. New parents are trying to nail down the basics, including but not limited to: feeding, bathing, calming their fussy baby, and, hopefully, something that vaguely resembles sleep. So, unless a friend or family member directly asks for information or advice, it's probably best to let them figure out what works for their family.

Although Williams is refraining from offering parenting wisdom to Markle for the time being, the tennis legend does have some good nuggets of advice up her sleeve. In April, for instance, the professional athlete shared some on-point insight for parents-to-be.

Williams continued, "My whole life is so planned and this is the one time where it wasn't. You just gotta go with the flow."

Amen! (If I've learned anything over the past eight years or so of my own parenting journey, it's that you've got to make peace with rolling with the punches.) And based on what the tennis star has shared about motherhood so far, I'm sure Serena Williams will be there to support Meghan Markle with real and practical advice when or if she needs it.