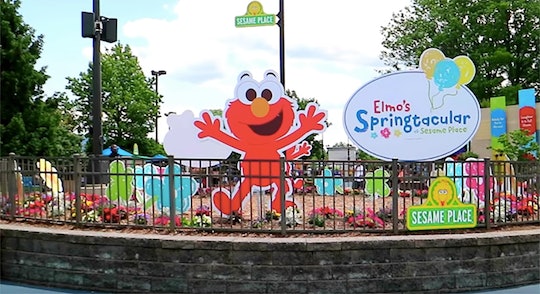 Sesame Place Is The First Theme Park To Be Autism-Certified, & Parents Are Thrilled

In case you weren't already aware, April marks National Autism Awareness Month. And to draw attention to this important time of the year, Sesame Place shared an exciting announcement on Monday, National Autism Awareness Day, that demonstrates its commitment to children with autism and their families. In an awesome turn of events, Sesame Place is now autism-certified — a development that is earning the theme park a lot of praise from parents.

Many theme parks fail to accommodate children with disabilities, despite the fact that kids and their families are a core demographic for theme parks, and all families deserve the chance to enjoy a theme park without having to worry about whether their child will comfortable or safe. But the good news is Sesame Place, a theme park in Langhorn, Pennsylvania, wants to step up to model the ways theme parks can better serve the autistic community. Case in point: Sesame Place has partnered up with with the International Board of Credentialing and Continuing Education Standards (IBCCES) to ensure that it is a "certified autism center" (CAC). In fact, Sesame Place is the first theme park in the world to be designated as a certified autism center, according to a press release.

Essentially, this means that the establishment is committed to having "at least 80 percent" of its staff trained and certified in the field of autism, and that it continues to offer "ongoing training in autism," according to IBCCES. Additionally, a CAC must comply with National Healthcare/Education Accreditation standards and HIPPA and ADA requirements.

Now that Sesame Place has received its certification, it's ready to serve children with autism and their families, starting April 28 when the park reopens for its 38th season.

In a statement about this amazing development, Sesame Place park president Cathy Valeriano said, via the press release:

As the first theme park in the world to complete the training and become a CAC, Sesame Place is better equipped to offer families inclusive activities for children with autism and other special needs. Robust pre-visit planning resources will be added to the park’s website including a sensory guide, developed by IBCCES. This sensory guide will make it easier for parents to plan activities that satisfy their child’s specific needs and accommodations by providing insight on how a child with sensory processing issues may be affected by each sense for each attraction. The park will also have two quiet rooms located on Sesame Island. These rooms will have adjustable lighting, and a comfortable seating area for guests to take a break.

As for the park's staff, they'll receive training on best practices when it comes to interacting "with all families and children with special needs," especially where it concerns the autism spectrum, according to First State Update.

Following Sesame Place's big announcement, many people took to Twitter to congratulate the park on its commitment to children with disabilities.

And one parent shared an adorable photo of her daughter cuddled up to Sesame Street's first character with autism, a muppet named Julia. "On our first trip last year, we made a lifelong friend," the parent captioned the snap, according to Twitter. "This is autism."

As some parents probably already know, Julia was first introduced to the Sesame Street cast in April 2017, and she has quickly become a popular character.

Julia’s puppeteer, Stacey Gordon, is especially attached to the character because her own son is autistic. “Had my son’s friends been exposed to his behaviors through something that they had seen on TV before they experienced them in the classroom, they might not have been frightened,” Gordon told 60 Minutes of Julia's importance in educating kids about other children's needs and behaviors, according to HuffPost. “[They] would have known that he plays in a different way, and that that’s OK.”

Of course, it's not hard to see why so many people are impressed with Sesame Street and Sesame Place at the moment when you consider all the work they've done to support kids with autism and their loved ones. For parents who grew up dreaming of a trip to Sesame Street, that looks increasingly like an option for their kids, too.