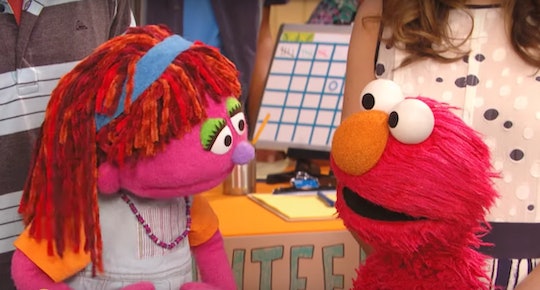 It's hard to even think about young children having to go hungry, or having to experience what it's like to not have a stable place to call home. But in an effort to raise awareness about this rarely-discussed issue that is actually a reality for many kids in the United States, beloved children's show, Sesame Street, has opted to address it head-on. Sesame Street's Muppet Lily addresses child homelessness for the first time ever, offering a way for children affected by homelessness to feel less alone, but also to encourage greater awareness for everyone about this common and heartbreaking reality.

While Lily's storyline won't currently be included in television episodes of Sesame Street, according to CBS News affiliate WSAW, she will be featured in "online videos, stories and resources," as part of a new initiative launched Wednesday for Sesame Workshop's Sesame Street In Communities program. But young fans of the show may actually already recognize the bright pink Muppet: Lily first joined Sesame Street in 2011 as a character whose family is food-insecure, and was featured in the one-hour primetime special, Growing Hope Against Hunger, which was designed to raise awareness of the the issue of hunger and food insecurity among families in the United States.

A series of videos featuring Lily are now available to stream on the Sesame Street In Communities website, and show the various struggles she faces after her family has lost their apartment, and need to live temporarily with Sofia, an adult on Sesame Street who is helping Lily's family get back on its feet.

In one video, for example, Lily opens up to Sofia about her fear that her family will never have a place to live, while in another, Sofia helps Lily and Elmo practice talking about their big feelings, even though it can be hard. And after Lily's family ends up moving into a new apartment, Lily also shows Elmo about a way she learned to stay calm during hard times — by touching a special ribbon bracelet her mother made for her.

In addition to the videos, though, the website also offers suggestions for parents and caregivers to help start a conversation with children about what they've watched, as well as activities that can help drive home the incredibly important message that they can still find support, safety, and security in their lives, even if they don't have a permanent place to live.

As Sherrie Westin, Sesame Workshop's President of Global Impact and Philanthropy, noted, the goal of the initiative is ultimately to let children know "that they are not alone and home is more than a house or an apartment — home is wherever the love lives."

Unfortunately, that's a message that many American children need to hear right now. According to Sesame Workshop, more than 2.5 million children are experiencing homelessness nationwide, with a whopping 1.2 million of those children under the age of 6. What's more is that, in New York City, where Sesame Street is set, one out of every 10 students was homeless during the past school year, according to The New York Times, meaning that, while homelessness may not be an issue often discussed (thanks in large part to the stigma surrounding it), it's one that is having a huge impact on families and children.

While the new Sesame Street initiative may not be able to ease that immense burden, it does help emphasize that there are ways we can all help support children to feel safe, and to develop some coping stills that can help ease the trauma of what they are experiencing. In a separate clip, Elmo and Rosita even meet a group of real-life children currently experiencing homelessness to discuss what "home" means to them, helping to normalize the experience, raise awareness, and let children affected by homelessness know they are far from alone.

Though the topic of childhood homelessness isn't an easy one to tackle, the fact that Sesame Street is helping to bring it into the open without shame is so incredibly necessary. And while it will definitely serve as a invaluable support for children who need to hear and see others just like them, the campaign also offers up a much-needed message of awareness for all children, parents, caregivers, and teachers, who can help play an important role in fighting back against the stigma that only intensifies children's suffering.