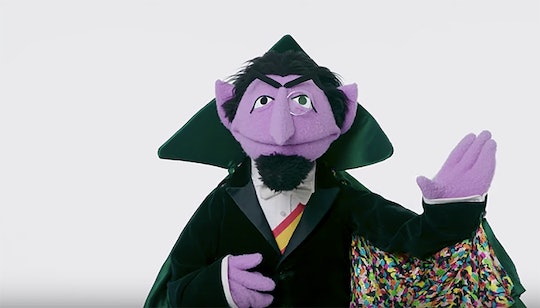 Please Enjoy This Video Of 'Sesame Street' Characters Impersonating Each Other

It's amazing when children and parents can enjoy content together, which is one reason why this video of Sesame Street characters doing impressions of each other has quickly become an internet sensation. Not only will it make your kids laugh, but the hilarious winks to adults will have you cracking up, too.

On Thursday, Vanity Fair released a video titled, "The cast of Sesame Street Do Impressions of Each Other." The funny clip features Elmo, Cookie Monster, Abby Cadabby, and The Count.

The first one to get roasted was Big Bird, with his height (duh) being the focal point of conversation. "He's tall, so I'm gonna look down, 'cause he has to look down at people, he's so tall," Abby Cadabby quipped, while Cookie Monster kept it simple, joking, "La, la, la. Me, Big Bird!"

Next up for impersonations was Cookie Monster, who The Count boiled down to one hysterical line, "I am a monster, and I say 'me' a lot!" Burn.

As for Abby Cadabby, she did the cutest growl while saying, "I need some cookies for my belly!" Nailed it, Abby.

Judging by the comments on the video, however, the top impersonation came from The Count poking fun at Ernie. "Ah, it's 'I'm here to annoy you!'" he cackled. "I am here annoying you, especially my best friend, Bert. I am annoying you!"

"I literally died!" one person said about the joke, while another commenter wrote, "The Count is clearly a method actor."

Of course, there are plenty of other giggle-worthy lines in this video to enjoy. Happy watching!

More Like This
Freeze! The Single From The New 'Bluey' Album Just Dropped
The 20 Most Romantic Quotes From Friends
Exclusive: Watch How A Group Of Princesses Save The Day In Netflix's New Animated Series
When Does 'Yellowstone' Season 5 Come To Peacock? Not Soon Enough
What Parents Are Talking About — Delivered Straight To Your Inbox