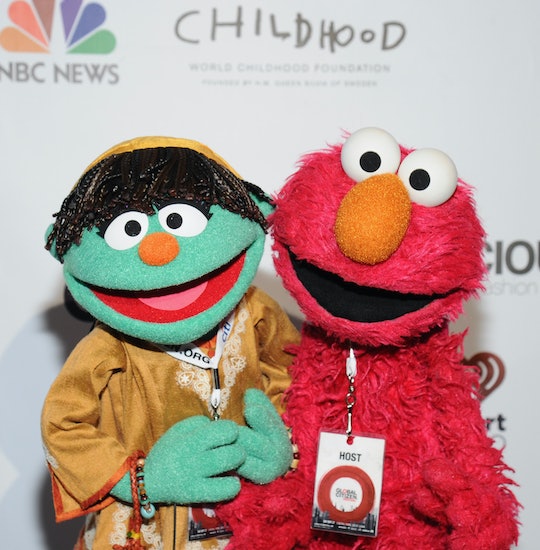 A few special guests made it to South by Southwest this year — and yes, I'm talking about everyone's favorite Sesame Street monsters. Over the weekend, at 1 p.m. ET daily, Mashable hosted 90-minute livestreams on Twitter, featuring Sesame Street characters, Mashable editorial staff, and a few other special guests. The Sesame Street characters at SXSW took on a couple of big subjects, and the ensuing videos should help parents explain difficult topics to their kids.

Sesame Street's Grover and Bert chatted with SXSW guests like astrophysicist Neil DeGrasse Tyson, New Jersey Sen. Cory Booker, and actor Rainn Wilson. With help from the resident experts, the Sesame Street characters discussed all manner of deep things, from the universe to the meaning of life to what "freedom" means. You know, the important topics in life.

Luckily for those who couldn't make it to Austin, Texas, for the conference, the Mashable Show brought the best of SXSW to Twitter over the weekend, and added Sesame Street characters to make even the more confusing science and tech topics a bit more kid-friendly. (I mean, comparing Grover's mouth to a black hole makes the whole subject just a tad more accessible.)

Here's just a few places where Sesame Street characters showed up for a chat:

Tyson started by explaining exactly what an astrophysicist does (because hey, it's a legit question) before he dived into life on other planets (because Grover wanted to know if chickens and people and blue monsters like him exist outside of Earth).

He also explained what a black hole is, saying: "[It's] a region of space where the gravity is so strong that if you fall in, you're never coming out, and neither will a beam of light. At the speed that light has, it's not fast enough to escape this region of space. So you fall in, light falls in, nothing comes out, it's black, and it's a hole. We call it a black hole. Just like your mouth."

Of course, both Grover and Tyson were pretty sure Cookie Monster had better qualifications for being a black hole (how many cookies do you think he could eat?).

On Saturday, Booker gave Bert his own definition of freedom, saying,

One of our great presidents, FDR, gave an incredible speech called "The Four Freedoms," and in that, he talked about the importance, the urgency in a nation this great, this wealthy, that children should not grow up sort of shackled by these kinds of fears and this kind of worry and this kind of deprivation — that we should liberate every American to be free from those concerns.

Rainn Wilson, The Office actor and founder of SoulPancake, explained to Bert that life is a lot like Sesame Street, where you have a bunch of diverse characters coexisting. Love, on the other hand? Wilson is still trying to figure that out, but Bert knows he loves his friend Ernie. Which describes love pretty well, I think.

Regardless of whether your kids are down with the topics tossed around at SXSW, if you grew up with Sesame Street, you'll likely get a kick out of the Mashable Show videos. And hey, you might even learn a thing or two about the universe.