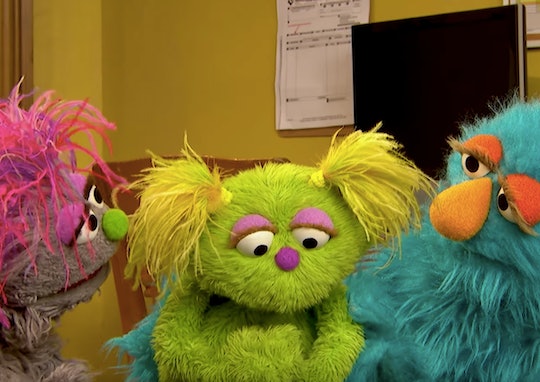 The children's entertainment industry is, and always has been, presented with a unique and serious responsibility, which is to not only educate the next generation, but to present them with media that makes them feel understood, affirmed, and more prepared to become functioning adults in the real world. Of course, representation is a huge piece of this puzzle, and for decades, everything from media to books had been distinctly nuclear, cis, and white-washed. That's no longer the case, as Sesame Street introduced Karli, a muppet in foster care, to join the crew.

In a recent episode of the decades-running beloved kid's show, the audience was introduced to a new character named Karli, who is Elmo's friend. The show explains Karli's living situation as her having "for-now" parents, as The Washington Post reported. In one clip, Karli's foster mother tells Elmo that she and her partner are "keep[ing] her safe until her mommy can take care of her again." Karli's foster mom says this is happening because her birth mother is "having a hard time," but reassures Elmo that she is nonetheless loved and wanted unconditionally.

Towards the end, Elmo addresses another huge element of the foster care program, which is the lingering, and potentially, ongoing uncertainty. "What we do know is that Karli belongs here now," her mom says. "We want her here with us."

The message is vital for kids who are, or may eventually be, put into the care of the foster system, if not also family or friends.

The 2018 Adoption and Foster Care Analysis and Reporting System (AFCARS) report from the U.S. Department of Health and Human Services notes that of the children that spend time in the foster care system, they are typically within the state's care for two years, and 6 percent of those children will be there for five years or more. The average age of a child entering foster care is 8 years old, which is distinctly older than the misperception that the system is largely for babies and toddlers. One third of those children are people of color, according to the AFCARS report.

This information makes representation that much more important. At 8 years old, and even sooner, a child will have enough cognitive capacity to process what's going on, and probably will feel confused, uneasy, and in need of guidance and reassurance.

Karli's introduction is not the first time Sesame Street has made headlines for inclusivity, which in some cases has been unprecedented for daytime TV. In 2017, according to NPR, the show introduced a muppet who has autism, named Julia. In the years since, the show has used the character of Julia to show how friendship may look different for individuals with autism, and how they might do everything from playing to giving hugs differently.

It should go without saying that including characters who aren't neurotypical or growing up in a nuclear household structure is essential, because there is nothing more important than making sure children feel seen, heard, and represented, especially when they have more challenges in their lives than others to begin with. It also helps other children empathize and understand their friends and classmates that much better.

All in all, Karli on Sesame Street is another major win for representation and children's mental and emotional health.