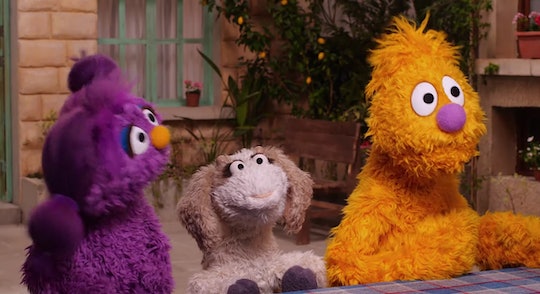 In response to the ongoing refugee crisis, the company behind Sesame Street has launched a new show in Arabic in partnership with The International Rescue Committee (IRC). The goal is to bring support to refugee children in Syria, Jordan, Lebanon, and northern Iraq through educational television programming aimed at helping them learn, grow, and, ultimately, thrive.

Although stories of refugees no longer dominate news headlines as they once did, the global refugee crisis is far from over. By the end of 2018, some 70.8 million people were reported by the United Nations to have been forced from their homes as a result of conflict and persecution, resulting in the highest level of displacement ever recorded. And nearly 30 million of those displaced people are refugees, half of whom are children, according to data from the United Nations.

Because many of today's refugees fled conflicts that have been ongoing for years now, more and more refugee children are having to spend their entire childhood in displacement. While most humanitarian aide is focused on survival — less than 3% of all humanitarian aid goes toward providing refugee children with an education, according to Sesame Workshop and IRC — children need and deserve more. In fact, the IRC reported that Syrian refugee children have had few opportunities to learn and play as any other child would. What's more, exposure to unspeakable trauma, neglect, and violence has put them at risk of developing toxic stress and other developmental impairments.

That's where Sesame Workshop, the company behind Sesame Street, comes in. In an effort to provide refugee children with hope and opportunities to learn, Sesame Workshop has teamed up with the IRC to launch an Arabic version of Sesame Street specifically developed for refugee children. Named Ahlan Simsim, which translates to "Welcome Sesame," the show stars a 6-year-old Muppet named Basma, her new friend Jad, and a lovable but mischievous baby goat named Ma'zooza.

“Our partnership with Sesame Street will help transform children's lives by making sure that their social-emotional needs are met so they are able to receive an education, contribute to their community and succeed as adults," president and CEO of the IRC, David Miliband, said in a statement.

Ahlan Simsim doesn't explicitly name Jad as a refugee, according to CBS News. Instead, the show drops a number of hints, including the fact that Jad's character is voiced by a Syrian puppeteer, has recently moved to Basma's neighborhood, and Jad's explanation that he can't show his new friends his favorite toy because it got left behind when his family came to the area. Together Sesame Workshop and the IRC are planning to deliver in-person services to more than a million refugee children while also delivering educational television content to another nearly 8 million children, CBS News reported.

The first season of Ahlan Simsim is set to center around building fundamental skills for identifying and managing emotions, according to the MacArthur Foundation, which helps fund the show. It will, beginning in February, reportedly air in some 20 countries throughout the Middle East, North Africa, and the Gulf, according to CBS News. To help bring the show to refugee children living in camps, the IRC has brought in satellite dishes and plans to integrate the show into the lessons taught at the early childhood centers they operate in refugee camps.

Sesame Workshop and IRC were able to launch Ahlan Simsim thanks to generous grants from both the MacArthur Foundation and the LEGO Foundation. You can help further support Ahlan Simsim and Sesame Workshop's work with the IRC by making a tax-deductible donation through their website.