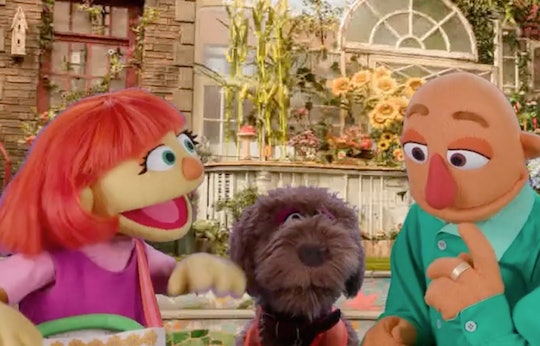 Early detection matters. It matters for kids, it matters for parents, and it matters for the long-term development of those who have developmental disorders, such as autism. Though doctors are able to diagnose children with autism as early as 18 months old, they often are not diagnosed until they are 4 or 5, meaning that there's a significant gap of time during which they could have been receiving specialized care. To advocate for just how important early detection is, Sesame Street's Julia encourages early autism screenings in this new campaign.

Last year, Sesame Street introduced their very first autistic character, Julia. Many of her plot lines have been centered around how others can better relate to kids with autism, such as teaching alternatives to hugs. Now, Sesame Street has partnered with Ad Council and Autism Speaks to release a video explaining why it's important to normalize screenings for everyone, because as developmental milestones differ, it can be challenging for parents to recognize the symptoms early on.

The campaign's press release shared that their independent research indicated 66 percent of parents of children ages 6 and under have not had an autism screening, though it could easily be incorporated in back-to-school checkups, or school exams.

In one of the campaign videos, Julia is seen using a "talker," which is a digital device that can help kids with autism find the words they want to say. With the device, Julia can press a picture of what she wants to communicate, such as "throw the ball," or "play with the dog." In another, Julia is seen getting ready to play "band" with her friends, who pause to remind her to put on headphones, as loud sounds can be difficult for her.

The moral of each is that, for Julia, early autism screening was crucial, because it allowed her family to give her the tools and awareness she would need to best function, play, relate to others and enjoy her childhood.

“Receiving an autism diagnosis is just the first step in creating a better future for a child on the spectrum, and there are multiple benefits to getting that early diagnosis,” Autism Speaks President and CEO Angela Geiger shared in the press release for the campaign. “Research shows that early intervention can have a positive impact in so many ways, and we are dedicated to helping parents learn the signs and feel empowered to help their children lead their best lives.”

“Early screening made a lifetime of difference for Julia and her family, and we’re thrilled to share her story with families through this campaign,” Sherrie Westin, President of Social Impact and Philanthropy at Sesame Workshop also shared. “Through our Sesame Street and Autism: See Amazing in All Children initiative, Julia has shown that all children are amazing in their own ways. With the right support, every child can reach their full potential.”

Parents are encouraged to visit sites such as ScreenForAutism.org, or DeteccionDeAutismo.org, where they can find both resources in English and Spanish on how to identify autism, and then how to appropriately support the child if they are diagnosed officially.

Finding new and more approachable ways to spread word about the importance of early diagnosis and treatment is essential because, as we've seen with Julia, understanding a child's specific needs can assist parents, teachers and guardians with ensuring that they are able to acclimate to life with a comparable amount of ease to everyone else.