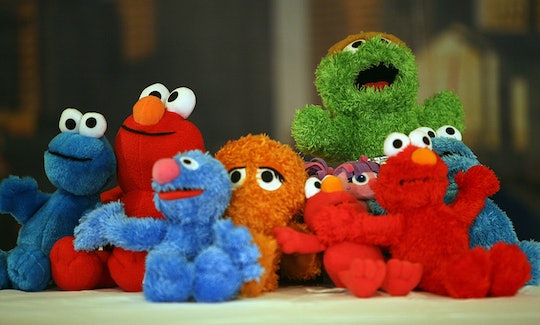 Twitter's Debate About 'Sesame Street' Characters Will Have You Grinning

Leave it to Twitter to ask the pressing questions of today. Not why we don't have universal healthcare yet. Or why climate change is even still being debated. No, I mean the really important stuff. Sesame Street's Twitter account asked which character fans would take to a deserted island... and people had strong opinions about it.

As BuzzFeed reported, it all started when the beloved kids' TV show got a debate going on social media.

"You’re stuck on a deserted island and you can pick one of these Sesame Street friends to come with you," the caption of the tweet read, showing a pic of Elmo, Cookie Monster, Oscar, and Grover. "Who are you picking and why?"

Well, of course, this got the Twitterverse to thinking. Really thinking.

And there were some pretty deep answers involved. There was also some really good analysis of the data (i.e. character strengths and weaknesses about which muppet would be the last standing) based on most of us having watched so much Sesame Street over the years.

Many fans on Twitter agreed that Grover might be the Street-er you want, based on the fact that he has his "Super Grover" persona, cape and all, which might help out as far as surviving on some tropical — or otherwise deserted — isle.

"Ever heard of Super Grover, you idiots? He’s gonna get stuff DONE," writer/director Joss Whedon chimed in, speaking for many.

Ahh, but that's not counting those who thought that Oscar's grouchy, serious disposition might make him cool under pressure in an emergency situation (as Good Morning America noted, there were all sorts of dissenting opinions).

"It’s clearly Oscar," noted one user on the children's TV show's feed. "He lives in a trashcan. He’s a survivor. Elmo, Grover, and Cookie are all more delightful, but all soft. Oscar would do what needs to be done."

As The Washington Post reported, Cookie Monster got a lot of "no" votes as far as being the company you would want on a dangerous adventure.

"Cookie’s blood sugar gets low, he becomes hangry, and it’s a wrap...This is science," one fan joked.

But he also got a lot of "yes" votes, given that he always has a collection of cookies with him.

Then there was Elmo to consider.

Fans on Twitter were super-divided on the famously scarlet muppet. Some thought his voice alone would force them to take him out within hours of being marooned, but there was also a surprising contingent of pro-Elmo people.

Good Morning America included a fan saying, for example, that Elmo's tendency to want to play games would truly make him the worst choice in such a situation, while the news site noted yet another fan wrote in: "It HAS to be Elmo. He’d be so encouraging and motivating and would just want to have a good time."

And that's not even counting all the rule-breaking votes for, say Animal (who was not even part of this thing), as Good Morning America noted actor Joseph Gordon-Levitt chose. Meanwhile, another Twitter fan responding to the question with a comment: all the muppets mentioned were male ones. "Zoe would have stopped and asked directions," the fan concluded. You can't argue with that.

Ahh, that's life in a democracy, right? No two opinions are alike. Now, if we could only have such a nuanced debate regarding something like the presidency, there would really be some national progress.