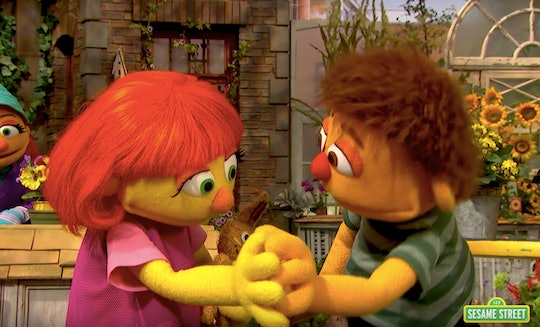 Whether you've been watching the show since you were young or you're just getting into it as your little ones have expressed interest, Sesame Street is all about how to grow up and be a good person. And this new video in which the muppets teach how to "hug" kids with autism using characters from the show is truly case-in-point.

In the video, shared earlier this month, Abby is feeling sad since her grandmother left after visiting and she doesn't want to play the game that she and her friends, Julia and Sam, are playing. After expressing how she feels, Sam suggests that he often feels better after he and Julia share a hug.

However, he goes on to say that because Julia has autism, she doesn't like big, close embraces. Therefore, they invented a new kind of a hug, called the "starfish hug." They then teach Abby how to do it, and she loves it. She then comes up with a new hug of her own, which she calls the "fairy hug," which is a variation of it.

To do the starfish hug, you simply put your hands out and touch them with another person, like the edges of a starfish were connecting. You can do it with one hand, or both. To do the fairy hug, you move your arms as though they are fairy wings, and let them connect with the other person's.

In the video, Julia is non-verbal, but is still able to play, communicate, hug, and connect with her friends. This is another important aspect of their friendship, which proves that just because someone is different, does not mean they cannot be part of your friend group.

Individuals who have autism, given their sensory perception and tendency to move a lot, may or may not enjoy hugs in the same way that other people do. According to the Organization for Autism Research, there are many ways to connect with them that will ensure that everyone is comfortable. The OAR suggests anything from massage, hand holding, playing with hair, or even just sitting together to watch television. These are all different ways you can express love and appreciation for a person without necessarily hugging them.

"If the individual with Autism cannot verbalize or explain their likes and dislikes, you may need to find out what works the best," Ethan Hirschberg, who's been has been "diagnosed with High Functioning Autism," explained in an article for OAR. "The physical hug might not even be the problem, it may be the feeling of someone’s hair on a cheek or the smell of body odor! All I can say is to be prepared for a trial and error period!"

Individuals with autism may find hugs distressing due to the way their neurological receptors process socializing, according to TIME. Martha Kaiser, an associate director of the Child Neuroscience Laboratory at the Yale Child Study Center, explained to TIME in 2012 that it has to do with the STS, which is a part of the brain that processes interaction: "This region is important for perceiving the people around us, for visual social stimuli and for perceiving social versus nonsocial sounds."

Kaiser's research on the subject has shown that individuals with autism have lower responses in these areas of their brains, making things like hugging seem unnecessary, if not troubling or confusing at times.

Regardless of the science, the reality is that for kids and adults who do not want to be hugged, there are many ways to connect and express fondness and emotion without making anybody uncomfortable. As always, Sesame Street is leading the way and showing us all how it's best done, while still having fun.

More Like This
23 Children's Books For Your Dino-Loving Kid
Celebrate Your Kindergarten Grad With These Sweet Instagram Captions
From Captions To Gifts, These Are All The Kindergarten Graduation Ideas You Need
These TV Show's Graduation Episodes Will Tug At Your Heartstrings