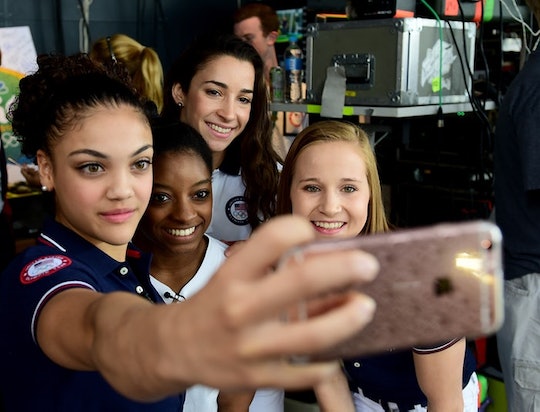 Alicia Sacramone Quinn, a former elite gymnast and mom of two, was shocked when she heard about the heinous sexual assault crimes committed by her former team doctor, Larry Nassar. "I had known Larry for so long," Quinn says, adding that for too long, the sport has “flown underneath the radar,” breeding the kind of culture that allowed sexual abuse in gymnastics to flourish in secret. "We were successful, so nobody was really questioning the tactics or the culture or what was going on, because we were getting results."

It was in this the absence of accountability and sincere scrutiny, that Nassar was able to abuse 265 children. "He was my team doctor for over a decade,” Quinn says of Nassar. “And it was just so crazy to think that someone who had been so close to you could have fooled you for so many years and be this monster that nobody really knew about, or nobody was at least openly talking about with and to each other. So for me it was just absolute shock." That shock permeated through the entire nation and devastated the gymnastics community; a community still reeling from the painful accounts of sexual abuse that uncovered a litany of issues within the sport.

But now the community is ready, and most importantly willing, to address and combat the pandemic of sexual abuse head on. The Athletic Assistance Fund (AAF) and The New York Society for the Prevention of Cruelty to Children (NYSPCC) — the world's first and oldest child protection agency — have announced a new partnership to help significantly change the culture that enabled a predator like Nassar to thrive.

"We want to eradicate sexual abuse in the sport of gymnastics," Dr. Mary L. Pulido, PhD and Executive Director of NYSPCC, tells Romper via phone. "And we’ve been keeping children safe since 1875, so we have the expertise and we know how to do it. So our goal is to make gymnastics a safe place, a safe sport, where children can thrive and children can succeed." The partnership will identify the issues and environments that allowed sexual abuse in the past and implement a multi-pronged approach to preventing it in the future. That approach will include a thorough needs assessment and research; focus groups of gymnasts, parents, coaches, and gym owners; customized sexual abuse prevention training workshops; gym accreditation guidelines; and a Safe Gym Handbook and Policy Guide for coaches and gym owners.

"By educating the athletes and the parents and the coaches and the gym owners about best practices in child safety, and having clear standards, we hope to protect children from anything like this ever happening in the sport again," Pulido says.

This is not a short term plan that we have here, but really a vision for the future to protect our athletes and better the sport of gymnastics.

The initial reports of Nassar's crimes, and the brave but harrowing testimonies from more than 150 of his victims, dominated national headlines for months. The scope of the abuse was simply overwhelming, and as a result USA Gymnastics, Michigan State University, and the sport in general fell under intense scrutiny for facilitating and sustaining a culture that allowed child sex abuse to occur for so long and on such a devastating scale. "When you have institutions that one, don’t take the claim seriously, two, are out to protect their own reputation instead of protecting the children, and three, aren’t bringing people in who understand how to investigate and prosecute these claims, that’s the type of environment where the abuse continues," Pulido says.

For those within the gymnastics community, that time period of revelation and accountability was painful to say the least, but in its wake came an opportunity for people who love the sport to take a careful, calculated look at how this type of systemic sexual abuse could and does happen, how children and athletes are let down by institutions that claim to value them, and what can be done to move the sport forward to ensure it's first and foremost a safe place for kids to grow and thrive.

Everyone has to have their eyes on making sure that inappropriate behavior is called out immediately and something is done about it.

"What I didn’t have when I was a child athlete is the education and the actual discussion, and consistency of that discussion, on sexual abuse and the abuse in the sport of gymnastics," Tina Ferriola, Athletic Assistance Fund Board Chair, CEO of NYC Elite, a gymnastics program located in New York City, and former competitive gymnast, tells Romper via phone. "So, what this partnership will provide is a learning environment to us, so if the athletes ... or the parents suspect abuse they have the knowledge and resources to understand what to do in that occurrence."

That knowledge and understanding isn't innate, even though as parents we're naturally protective of our children. "For most parents, the thought of someone sexually abusing a child is just horrific," Pulido says. "They can’t even get their mind around it because it’s just so foreign." And since 90 percent of child abuse cases are perpetrated by someone the child knows and trusts, it's even more difficult for parents to contemplate a scenario in which someone they know purposefully hurts their child. That's why Pulido is excited about the partnership between AAF and NYSPCC, and believes that working together, the two organizations can arm athletes, parents, coaches, and gym owners with the knowledge they need to eliminate child sex abuse in the gymnastics community and beyond, even when it's impossible to fully comprehend.

When it comes to Larry Nassar, the onus on calling out abusive behavior fell solely on the children. But that will no longer be the case, according to Ferriola. "It was so sad, for the whole culture of the sports of gymnastics, to be in this situation. And for these survivors that went through what they did," she says. "Watching the testimonies in Michigan, my heart was just broken. It made me become so passionate about changing this for the future and making what needs to be right within our sport."

So after asking herself what she could do to protect the over 4,500 athletes and families she and her staff at NYC Elite serve at gyms across New York City, and finding little to no resources, she contacted NYSPCC. "[This partnership] really came out of a driven initiative from myself to start at the very bottom with my own athletes and my gym and parents and coaches, to give them the education that they needed," she says. "And now I hope it spreads everywhere with this nationwide partnership [that we have the opportunity to have]."

Ferriola wasn't the only person inspired by the courage of Nassar's victims: Pulido calls the survivors of Larry Nassar "role models" numerous times during our conversations, and says "they should be heralded as such" — and moving forward the two organizations and the people behind them are dedicated to centering the voices and experiences of sexual assault survivors in order to create a best practices that will truly keep young athletes safe. "This is not a short term plan that we have here, but really a vision for the future to protect our athletes and better the sport of gymnastics," Ferriola says.

Of course, gymnastics isn't the only sport or institution to be plagued by the epidemic of sexual abuse, nor are young athletes the only demographic at risk. Troubling reports of systemic abuse involving the National Football League, the Catholic Church, Boy Scouts of America, and other private organizations have long highlighted the cultural perversion that is sexual assault, as well as our collective apathy towards it. The truth is, a reported one in five girls and one in 20 boys will be victims of child sexual abuse, according to the National Center for Victims of Crime. But Ferriola realizes that given the media coverage of the Nassar crimes — and the fact that gymnasts are at their peak capabilities between the ages of 10 and 20 years old — the gymnastics community is in a unique position to set a precedent that could end up bettering sports across the board.

"I do think that there are a lot of other sports and organizations watching to see what is handled in the sport of gymnastics," she says. "And I truly hope that they’re paying very close attention and that this information is able to be widespread, so that they follow steps in some of the educational opportunities and resources that we are providing through the partnership with NYSPCC."

The fact that the gymnastics community is taking this opportunity seriously is not lost on Quinn, who says that even though the revelation of sustained child sex abuse was devastating, she wouldn't hesitate to put her kids, now 2 and 8 months, in gymnastics if that's a sport they'd want to pursue in the future. "We can’t let one or a few negative people’s actions ruin that because it’s bigger than them," she says. "And now that there’s going to be practices put in place to keep these athletes safe, for me it’s a no-brainer. I know what gymnastics has to offer."

"These things unfortunately happen in not just gymnastics but other sports as well," she continues. When it comes to speaking out about and addressing abuse, Quinn says, "you can’t be afraid of what the backlash or fallout will be, because doing the right thing will always be the right thing." She acknowledges that this work may not be easy or pleasant to live through, but, she says, "It's going to create a better environment, better culture, a better sport from there on out."