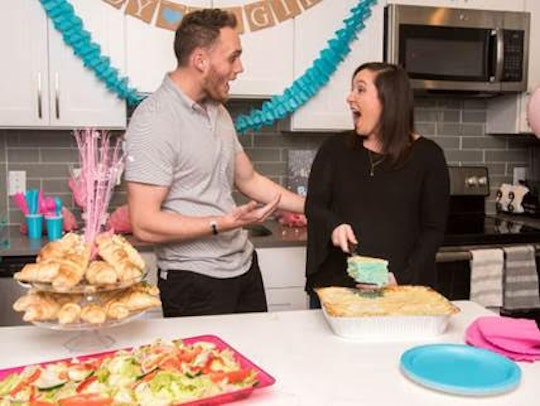 Finding out the sex of your baby is a huge milestone in many people's pregnancy journey. But today's parents are frequently going above and beyond the normal announcements and continuing to partake in some over-the-top gender reveals. Cakes, balloon pops, confetti explosions, and paint splatters are all a part of these kinds of reveal *events* and everyone from celebs to your next door neighbors are taking part. But, there's a new level now, because sex reveal lasagna is the latest over-the-top way to find out if you're having a boy or a girl. It's the trend that absolutely no one asked for.

Of course, there are tons of sweet ways to do a sex reveal, but this one is among the few savory ones around. And instead of pink or blue frosting, as it is with a cake, it's all about the cheese.

Villa Italian Kitchen, a quick-serve pizza brand, is offering a sex reveal lasagna catering package for just $140. Parents-to-be can choose from a lasagna with pink or blue ricotta cheese filling, a tray of garlic rolls, and a choice of garden, Caesar, or Greek salad. So it's not just a gimmick, it's also a full dinner.

And as you can guess, this offering has Twitter talking and the consensus seems to be — no thank you.

And what does everyone's favorite lasagna-eating, Monday-hating cat have to say about this? Clearly he's at a loss for words.

There's no word on whether people are actually clamoring for this festive catering deal, but the company has asked customers to use the hashtag #lasagnareveal to document that momentous occasion, should they go ahead and plan a dinner for the big event. As of publishing time, there was nothing under the hashtag but the company's own advertising of the meal.

This isn't the latest instance of out of hand sex reveals. One dad broke his ankle at a sex reveal event, another set of parents ended up having a brawl outside a restaurant after their reveal party, and still another accidentally started a wildfire, according to the New York Post. So, sex reveal lasagna seems pretty harmless in comparison. Harmless, but not necessarily entirely appetizing.

And celebrities have sex reveal parties all the time, according to Cafe Mom. Kate Hudson and Danny Fujikawa participated in a balloon pop. Hilary Duff and Matthew Koma released confetti cannons. And Kristen Cavallari and Jay Cutler posted a photo where everything was black and white except for a small pair of pink shoes. So, you get the idea — sex reveals are a big thing. But so far, there hasn't been any celebrity lasagna reveals. But, the year is young.

Maybe parents should take a cue from Prince Harry and Meghan Markle, and let the sex of their baby be a surprise. The two aren't going to find out if baby Sussex is a boy or a girl until the baby is born, according to The Mirror. As for announcing the gender with a lasagna, maybe step away from the carbs and just send out an announcement instead.