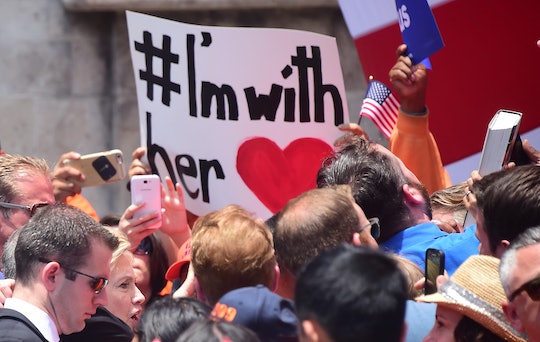 Sexist Responses To Hillary Clinton Being The Presumptive Nominee Get Ugly

The Associated Press announced on Monday that former Secretary of State Hillary Clinton now has enough delegates and superdelegate support to become the presumptive Democratic nominee. Unsurprisingly, the proverbial ink had not yet settled before upset Republicans began belittling the victory in an expectedly discriminatory manner — but it was enraged Democrats, many of whom took to Twitter divided over whether Vermont Sen. Bernie Sanders' refusal to drop out of the race was a sexist move — that came out of left field. These manner of sexist responses to Clinton becoming the presumptive nominee suggest it might be an uphill battle before Democrats unite behind the candidate.

The heated in-party debate was instigated on Monday, when a New York Times reporter asked Sanders whether it was sexist to stay in the race when the country appeared to be on the eve of electing its first female presidential nominee. “What do you say to women that say you staying in the race is sexist because it could get in the way of what could be the first female president?” the reporter asked Sanders.

According to an account of the incident in The Los Angeles Times, Sanders bristled at the suggestion. "It’s not a serious question," Sanders said. "So if Hillary Clinton runs for president, it is sexist for any man to oppose her? I don’t think it is sexist."

Now that Clinton has been declared the presumptive nominee by many news organizations, the question of whether it's sexist for Sanders to stay in the race is raging on Twitter. Some Sanders supporters appear to be under the false impression that Clinton herself orchestrated the AP's decision to delcare her the nominee, including this Tweeter, who appealed to other prominent female Democrats to oppose Clinton:

Meanwhile, those with more level heads, including MSNBC correspondent Joy Reid, jumped in to point out that Clinton herself was unhappy with the announcement, which came at least one day sooner than expected:

Some Sanders supporters, upon facing an accusation of sexism, apparently conluded that it's not actually that bad a charge, such as this Tweeter, who promises to wear sexism like a "badge of honor":

And then there's this Tweeter, who shoots back with an accusation of reverse sexism:

Amidst these low blows between Democrats, though, are Trump supporters reminding everyone that, yes, there are different degrees of sexism. For example, this Tweeter, inexplicably, has a new theory about Clinton's gender identity:

In the end, whether or not some Sanders supporters espouse sexism—and whether Sanders' decision to stay in the race is itself sexist—it's clear that both Sanders and Clinton are far preferable to the misogynist who will be their adversary.

More Like This
Keke Palmer Casually Drops Her Baby's Sex On Jimmy Fallon
Does The FDA's Plan To Limit Lead In Baby Food Go Far Enough?
Josh Duhamel Is Glad He Took Fergie's Advice About Dating After Divorce
Freeze! The Single From The New 'Bluey' Album Just Dropped
What Parents Are Talking About — Delivered Straight To Your Inbox