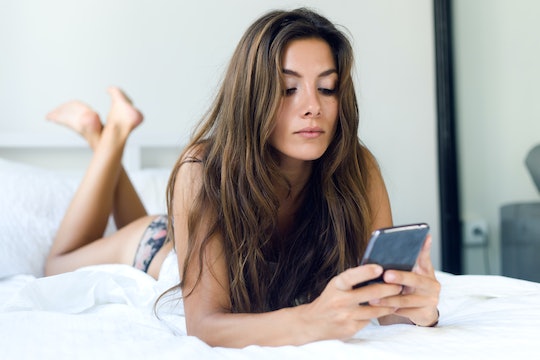 Sexting May Actually Be Hurting Your Relationship, New Study Finds

Keeping a relationship exciting and "spicy" is a challenge for many couples, especially those who have been together for longer periods of time. Some turn to sending sexy snaps and messages to one another, also known as sexting, to keep that fire burning. However, a recent study found that sexting can actually hurt your relationship if you do it too often.

Sexting comes in a variety of forms, ranging from suggestive text messages to nude or semi-nude photos and videos. While an estimated 80 percent of people send or have sent these sorts of messages, according to Business Insider, some do send and receive them more frequently than others. Researchers at the University of Alberta refer to these people as "hyper sexters," and found that their relationships can be negatively impacted by their messaging habits.

The study, published in Computers in Human Behavior, examined a sample of 615 Canadian and American adults, all of whom are in relationships, and asked them if and how often they sext. Individuals were divided into four groups: non-sexters, word-only sexters, frequent, and hyper sexters.

Hyper sexters reported the highest levels of sexual satisfactions in their relationships, but they also reported feeling more ambivalent, less secure, and less committed to their relationships. These people were more likely to watch pornography and flirt with other people on social media as well.

Lead author and human ecology professor Adam Galovan told Folio that the sex shouldn't be the center of a relationship. "Sexting doesn't seem to be a feature of a healthy relationship," he explained. "My interpretation is that the sexters are focusing more on the sexual part of their relationship and may be neglecting other areas."

Additionally, Galovan stated that technology may be interfering with real-life partner interactions:

This isn't the first time that sexting has been linked to negative consequences. A 2017 study of 352 college students, also published in Computers in Human Behavior, determined that roughly 10 percent regret sexting, sometimes even immediately after they send their messages. The study's author, Michelle Drouin, and her team found that roughly half of those who reported sending these messages said that they had positive sexual or emotional consequences following their messages, but it is worth noting that this is not always the case.

While it is only natural to want to keep your relationship interesting, sexting isn't the only way to do so. For example, the American Psychological Association recommends planning regular date nights, but it is important to try new things for these date nights. Rather than the same dinner and a movie routine every Friday night, consider going on a weekend trip to a nearby town, taking a class together, or hitting a museum. Outings such as these provide opportunities to talk and create real intimacy.

Studies such as these provide important information on establishing and maintaining happy, healthy relationships. While sexting may be a good option for some couples, there comes a point when intimacy has to extend beyond technology.

More Like This
Here's Why Your Vagina Burns After Sex
Here’s Why You & Your Mom Can Fight So Much
What Is Emotional Cheating? Experts Explain
Why Is My Vagina Itchy? Experts Explain
What Parents Are Talking About — Delivered Straight To Your Inbox