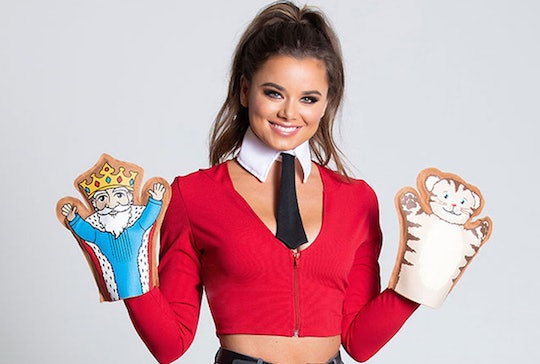 With Halloween about a month away, it's that time of year when everybody starts thinking about trick-or-treating, candy, and of course, costumes. And there's usually one or two costumes pegged to a moment in pop culture that go too far. This year, for example, a sexy Mr. Rogers Halloween costume is causing outrage on social media, as some believe the sexualization of a children's show character is simply inappropriate.

The Halloween costume retailer Yandy, which has been in the news before for making controversial costumes, released one of its takes on the beloved Mr. Rogers character with "The Nicest Neighbor" costume for $59.95. The costume comes with a tight, crop sweater, a detached collar and tie, high-waist short shorts, and accompanying accessories such as lace-detailed socks and hand puppets, as the character often used.

"Won't you be my neighbor? Entice your friends next door with your playful puppets!" the product description reads. "Suit up with a neck tie, and be the friendliest next door neighbor in town in this exclusive Nicest Neighbor costume featuring a red top with a V-neckline, long fitted sleeves, a white detachable collar with a black neck tie, and matching high waisted gray shorts with belt loops."

The costume promptly drew in criticism from some people on social media, primarily with concerns surrounding making the children's TV show character "sexy."

"Hm, why does mr Rogers need to be sexy? He has a children’s show. Not digging it," one person commented on Twitter.

"Sigh, this is why we can't have nice things," yet another commented.

One more wrote, "Mr. Rogers was a fun and caring character for kids. Isn’t meant for sexualization."

"we didn't need this, why sexualize someone who was supposed to be a trustworthy and good influence on kids and adults alike?" another questioned.

In response to the backlash regarding the costume, Yandy told Romper in a statement that the company "rolls out new and exclusive costumes that celebrate what's going on in pop culture" every year. "Yandy has perfected the art of weaving cultural inspirations and individual personality into garments," the statement continued. "Our lingerie and costumes exude charisma, style and personality."

The statement added that "Yandy’s customers are unapologetic about using fashion as self-expression" and Yandy's "goal" is "to create costumes that are sexy, fashion-forward and light-hearted."

"We don't take ourselves too seriously and neither do our customers. We know Halloween is a time to dress up, have some fun, and also be sassy," the statement said. "Yandy shoppers are witty, smart and don’t shy away from a bit of snarkiness, which makes them all the more sexy in our opinion. All in all, we stick to our mantra of 'own your sexy' and echo our inspiration by saying 'we like you just the way you are.'"

While this costume has incited some mixed responses, it's not the only item available through Yandy that involves the sexualization of a beloved character or persona. For example, the retailer also sells a sexy Bob Ross costume, a sexy Minnie Mouse costume, as well as a sexy Tinkerbell costume. It's worth noting that the majority of these costumes are designed for women or young girls, and the men's version of the "Nicest Neighbor" is a much more accurate depiction of Mr. Rogers.

Mister Rogers' Neighborhood was a TV show that ran from 1968 to 2001, and according to IMDb, the program "was among the most famous, longest-lasting and fondly remembered children's television shows," mostly due to Mr. Rogers' ability to use "his gentle charm to communicate with his audience of children." And it seems that interest in Mr. Rogers' legacy hasn't died out, even decades later. In fact, according to Deadline, a dramatized biopic of Mr. Rogers starring Tom Hanks called A Beautiful Day in the Neighborhood has begun production.

Fred Rogers' show, designed for young viewers, was undoubtedly a timeless piece of media whose cultural impact is still felt today. Whether or not that needed to translate into a sexy Halloween costume, well, that's up for the consumer to decide.

Editor's Note: This article has been updated to include a statement from Yandy.