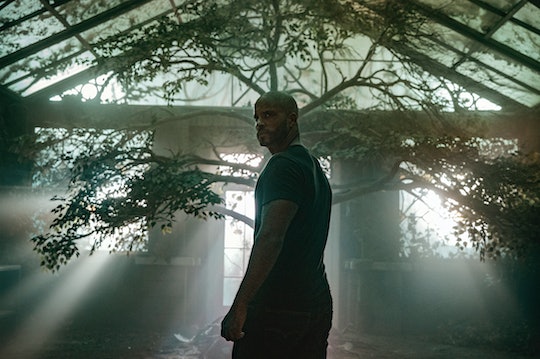 Shadow Moon's life changed dramatically when he met Mr. Wednesday on American Gods. Before that, everything had been relatively normal for him. He had a tough, but typical upbringing; a complicated but not entirely unusual marriage. Now everything he knows has been thrown into disarray, which has led some fans to question his identity. They think Shadow Moon is a god on American Gods, and it's a theory that holds water.

The show hasn't revealed anything about Shadow's history that could indicate a godly heritage, but that hasn't stopped fans from speculating. Shadow is definitely significant enough to have earned Wednesday's interest, plus he's intrigued nearly every god he's come across — Zorya Polunochnaya gave him a kiss when they first met, Ostara engaged in some serious flirting, and Bast gave him some interesting dreams. Is there a reason all these gods seem to flock to him, aside from the fact that actor Ricky Whittle is certifiably dreamy? Could he be one of them?

There was one significant instance of Shadow appearing to manifest powers that could be described as god-like. In the third episode of the first season, "Head Full of Snow," it seemed like he created a snowstorm after Wednesday told him to think about snow. Maybe it was Wednesday's doing and he only tricked Shadow into thinking he did it. But maybe not.

Viewers have come up with a host of options for Shadow's godly alter ego. The show is based on a book of the same name by author Neil Gaiman, and there are spoilers about Shadow to be found there. But no one knows exactly what will change when American Gods goes from page to screen, so for now it's best to focus solely on what the Starz series has been telling the audience.

Reddit user meripor2 thought that Shadow was a new god, one who hadn't come into his real identity yet. Viewers don't know much about how gods are born, but it's possible at least some of them ascended from mortal lives to immortal ones, as occasionally happened in Greek mythology when a person had completed enough incredible feats. "Perhaps the gods see the potential in Shadow Moon to become a new powerful god and Wednesday is trying to unlock his potential," meripor2 wrote.

Redditor ImNuckingFutts had an alternate theory. They believed that Shadow was a Grim Reaper for gods, the person who took a dead god's soul when they died. Perhaps Shadow's ability to make Laura' heart beat again in "Lemon Scented You" could be a sign — if he has power over the dead, maybe he was able to give her that momentary flush of life. And he's spent most of Season 2 hanging around a funeral home, which could be another tipoff.

But the most popular theory is that Shadow is a Norse god and son of Odin. Since Mr. Wednesday appears to be a pseudonym for Odin, one of the most important gods in the Norse pantheon, that would check out. If Shadow is his son, it would make sense for Wednesday to be so invested in him. The fortune Shadow received in the first episode of Season 2 had a line about being "like father, like son," which could have been some heavy foreshadowing.

Odin had many sons, but several Reddit users guessed that Shadow could be Baldr or Hod. User maorismurf999 pointed out that Baldr is called "The Shining One," and Shadow has a distinctive golden glow whenever Laura looks at him. But user leehwgoC felt that there were more parallels between Shadow and Hod: Hod was blind, and Shadow's ignorance of the gods could be a metaphorical nod to that. Hod was also the god of winter and remember, Shadow might be able to summon snow.

There's been no explicit confirmation on the TV series that Shadow is a god, or even that he has powers. But there's enough evidence to make the possibility a convincing one.