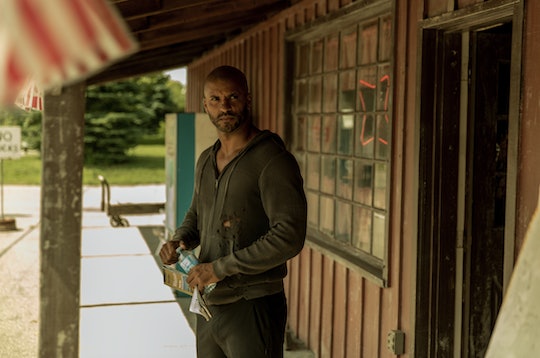 Shadow Moon Is An Integral Part Of 'American Gods'

There's something special about Shadow Moon on American Gods, but it's difficult to pinpoint exactly what it is. There must be a reason why Mr. Wednesday sought him out. Some fans think Shadow's been dragged into the war of the gods because he is one himself (albeit unknowingly). But at this point, that would be way too obvious to be a satisfying reveal. Shadow Moon is not a god on American Gods, though he's still an important character.

There are a few key pieces of evidence that Shadow has supernatural abilities of some kind, but they're all easily disputed. In the third episode of Season 1, "Head Full of Snow," Shadow appears to summon a snowstorm just with the power of his thoughts — but Wednesday was the one who told him to do it, and Wednesday is a god. It's possible that he summoned the snow and just made Shadow believe it was him, to confuse him and keep him intrigued enough to stay on mission.

There's also the golden glow Shadow emanates in Laura's zombie-vision, which guides her to him across vast distances. But that can't be a signifier of godhood, because it's specific to Shadow; Wednesday or Bilquis don't glow in Laura's eyes. It proves that there is something unique about Shadow, though it likely isn't godlike powers.

Shadow doesn't have much in common with the gods that have been introduced on the show. He didn't even know any of them existed until he entered Wednesday's employ. His origins are far from spectacular; he was raised by a loving mother and had a normal childhood, as shown in the second episode of Season 2. Until Wednesday showed up, Shadow lived a typical mortal life — which is the point.

As actor Ricky Whittle told io9, Shadow is an audience surrogate. He introduces viewers to this mystical world as he discovers it, allowing them to feel sadness, anger, and confusion through him. And because of that, it's important to the narrative for Shadow to be human. It creates tension because of the contrast; a human being thrust into a remarkable world is a very different story than a god meeting other gods. It feels like American Gods has been telling the former, not the latter.

And as user VK-on-Ahch-To said on SciFi StackExchange, author Neil Gaiman often writes about human characters finding themselves in magical situations. It's a topic he revisits over and over again, which makes it more likely that he's doing it here as well. Writers often revisit favorite tropes more than once; having an established pattern makes it easier to predict what he'll do next.

Some have speculated that Shadow is a different kind of god than the ones we've met so far: he's forgotten, or in disguise, or only a demi-god. That could explain why he doesn't know anything about gods, and why he's lived a mortal life until now. But based on what the TV series has presented so far, there just isn't enough solid evidence to make that theory indisputable.

Shadow's humanity serves an important function on American Gods. The fact that he's new to the world of gods is what allows the story to work. There may be something magical about Shadow, but in a show populated with mythic figures, it's necessary for him to seem like he's human.