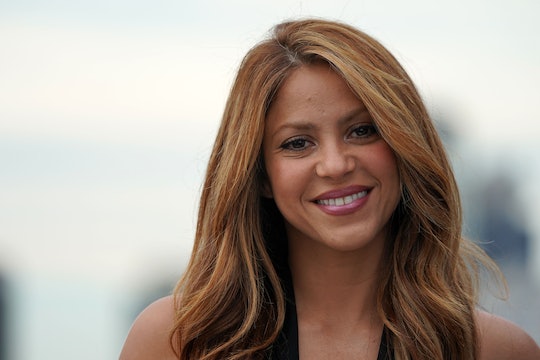 Ah, parenthood. Pre-kids, plenty of people have visions in their heads about what it might be like. Unfortunately, being a parent involves way more cleaning of poop and vomit, correcting undesirable behavior, washing and folding endless piles of laundry — and way fewer moments gazing lovingly into your child's eyes. Which is why Shakira's video of her sons pelting her with exercise balls is #MomLife at its realest. Because nothing fully prepares you for the reality of raising tiny humans.

In case you've lost track, the singer and her partner Gerard Piqué have two sons together: Milan, 6, and Sasha, 4. The busy mama was just trying to squeeze in a workout on Thursday, Jan. 16. But clearly, her boys had other plans. That's when Shakira's rambunctious little guys — who were bouncing and playing with exercise balls in the same room as their mom — started pelting her in the head with the balls. Ever dedicated to her sweat session, Shakira paid them no attention and kept at it.

That didn't stop the impressively-focused mom from sharing her plight via Instagram. “#momlife,” Shakira captioned a video of herself shifting her weight from side to side while holding dumbbells — as her boys had a blast attempting to break her concentration with flying balls. Because as every parent knows, kids are always *so* helpful while you're desperately trying to productive.

Back in 2014 — when her oldest was just 1 — the "Hips Don't Lie" singer shared she wanted a large family with Piqué. Enough to have their own sports team, to be exact. Which made sense, considering Shakira's husband is "If it weren't because of my music projects, I would be pregnant already," Shakira told Latina magazine at the time. "I would love to have eight or nine kids with Gerard — my own futbol team."

Regardless of Sharika's family plans, it seems she and Piqué have a good system going when it comes to splitting up parenting duties — when she isn't busy traveling on tour, that is. “We don’t have a written deal … or anything like that, but we both are very involved in parenting and try to sort it out the best we can,” she told Viva in September 2019. “We support each other and we also find a huge help in our families. We don’t know a different way to do it!”

From my own experience, the struggle of finding the time and will to workout with young children is real. Kudos to Shakira for powering through despite her (hilarious) distractions. Who knows? Maybe in 10 years or so, she can pay her sons back for their "help" when they're attempting to exercise.