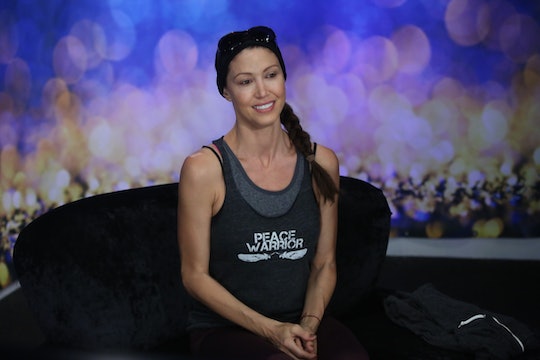 Because the Celebrity Edition of Big Brother is truncated, big moves are already happening in the house and Shannon Elizabeth seems to be running things. In the first week, Shannon formed a secret alliance with Omarosa as well as an all-female alliance in the house, only to go against it and flip the vote so that James Maslow stayed and Chuck Liddell was evicted. But while she may not care about turning her back on her fellow houseguests, Shannon's Instagram before Celebrity Big Brother shows her kind hearted nature, especially when it comes to animals.

Shannon is probably best known for being Nadia in the American Pie films, but since then she's gone on to become an animal activist. Not only is she a proud vegan, she also founded the nonprofit organization, Animal Avengers, which works to protect and save animals in various countries in Africa. The organization also works with animals in the U.S. as well. Shannon now lives full time in Cape Town, South Africa with her dog, Peanut, where she works closely with the animals there.

Check out this awesome photos from her Instagram and see the various kinds of animals she works with as well as what she does when she's not volunteering.

She Loves Hanging Out With Rhinos

Prior to moving into the Big Brother house, Shannon stopped by the Rhino Pride Foundation to say hi to the rhinos there.

She Enjoys Sunsets With Old Friends

Although Shannon may enjoy spending most of her time with animals, she also hangs out with humans as well. Here she is enjoying the sunset with her friend Nathan Bobik.

Prior to starring in American Pie, Shannon's first film was Jack Frost. Twenty years later, Shannon reunited with her costar Scott MacDonald, and they celebrated the anniversary of the film's release along with fans.

She's Always Up For An American Pie Reunion

Shannon also keeps in touch with her American Pie cast and a number of the cast members got together last year.

She Spends Tons Of Time With Her Dog

Looking at Shannon's Instagram it's easy to tell her favorite animal is her dog. Her photos of Peanut are adorable and it's no surprise that she said she'd take him into the Big Brother house with her if she could in her cast bio.

Just like many of us, Shannon loves to share pics of her food, but with sets up like these how could she not? Of course, all of Shannon's food pics are of vegan meals.

Here She Is Getting Some Much Needed Pampering

Shannon is undeniably gorgeous, but she's not above showing what it takes to get there. In this image she shared her first time getting her hair professionally done in Cape Town. Honestly, with her hair wet and rocking a towel she still looks great.

She Occasionally Catches Up With Superheroes

While Shannon may be a celeb in her own right, that doesn't mean she can't fangirl too. She had the awesome opportunity to meet Mike Coulter, who plays Luke Cage on Luke Cage and The Defenders, last year and was "so honored" to meet him. She also said in the caption that she's a "huge fan." Aren't we all?

She Enjoys Celebrating The Holidays

When Shannon's not working to save the animals and the planet, she's out having fun with her friends. She got together with one of her girlfriends, Deanne Thomsen, and dressed up for Halloween, and it's clear they had a great time.

Although Shannon's now in the Big Brother house, her team continues to post on her behalf, so make sure to follow her and then tune in to CBS to watch Shannon on Celebrity Big Brother.