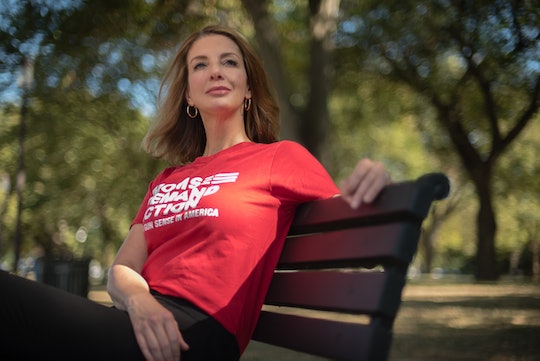 "Get Off The Sidelines": Shannon Watts On What To Do Before Nov. 3

It's been nearly eight years since Shannon Watts founded Moms Demand Action for Gun Sense in America as a "white suburban mom afraid her kids weren’t safe in their schools." The world has changed significantly since 2012, and the momentum behind the grassroots movement the mother of five started in response to the Sandy Hook mass shooting has only grown.

The election, of course, is top of mind, as are the deaths of Black Americans at the hands of police. "Police violence is gun violence," Watts tells Romper. The Moms Demand Action and Everytown for Gun Safety 2020 political strategy includes a $60 million investment to elect candidates running on gun safety. Both organizations officially voiced their endorsement for Democratic presidential nominee Joe Biden in March.

"This is the most important election of our lifetime, if not in our nation’s history for many, many reasons," Watts said during her keynote address at 2020's Mom 2.0 Everywhere Summit. "We have all got to get off the sidelines. I know we're all feeling anxious, or many of us are feeling anxious, and the best way to address that feeling of uncertainty is to do something. Anything."

As she stressed in an interview with Romper ahead of her Mom 2.0 address, with Nov. 3 just 46 days away, there are four things we can do before Election Day.

Watts tells Romper she understands that "feeling of trauma" many felt after Donald Trump was elected the 45th president of the United States, despite promising polls and even SNL skits indicating Hillary Clinton would win by a landslide. "I was sitting in the Javits Center in 2016 when I realized that we were going to lose ... literally shaking because I was so in shock by what was happening," Watts recalls.

This time around, however, Watts isn't going into Election Day with that mindset. And, according to Watts, one way to stay motivated is to "ignore the polls."

"Always be an activist with the idea in mind that we're losing because we have to keep our foot on the pedal all the way until Election Night and possibly even beyond depending on what the outcome of the election is," says Watts.

Get Your Teen Voter To The Polls.

Watts says it's on parents to make sure their kids actually cast a ballot. "It’s so important that we are making sure that our kids are registered to vote and that they have a plan to vote," says Watts, whose 19-year-old son is voting in his first election this year.

Even if your teen is "passionate about politics," Watts says we shouldn't assume they know exactly what to do before Election Day and urges parents to guide them through the process. "They may not have a plan, they may not be registered."

If You Care About Gun Violence Prevention, Follow The Money.

Across party lines, gun violence prevention is an issue "where we have the most common ground," Watts says. A Pew Research Center survey conducted in 2019 found that 60% of Americans believe gun laws should be stronger. What's more, a 2018 poll by Everytown for Gun Safety found that 61% of voters want candidates to focus on gun violence prevention, with 72% of suburban women voicing this view.

But it's not enough just to care about the issue; according to Watts, we need to do our research. "Understand the gun violence in your community. Who is it impacting most? And how and why?" Watts says. Then look up whether gun violence intervention programs in your area are currently funded.

In 2019, for instance, Gov. Gavin Newsom approved $30 million in funding for the California Violence Intervention and Prevention Grant Program (CalVIP) in the state's budget. Get in touch with your community's leaders and ask about the status of prevention and intervention programs, such as Cure Violence, the national program formerly known as CeaseFire, or Hospital-Based Violence Intervention programs that operate in ERs and trauma centers.

If none are funded in your area, start demanding, loudly, that they be.

For White Women Only: Do It Right This Time.

"I and so many other white women in this country were living in a bubble," Watts says of life before the Sandy Hook tragedy, not paying attention to the horrific realities of America's gun violence. To name one grim statistic, reported by the Giffords Law Center, 100 Americans die from gun violence every day in the United States, a startling number that disproportionately impacts "underserved communities of color in American cities."

Gun violence has only grown during the coronavirus pandemic, as data provided to NBC News from the Gun Violence Archive shows.

"Clearly Donald Trump has not made our country safer," Watts says. "By aligning himself with the NRA, by taking tens of millions of dollars from them for his campaigns, by not keeping promises to act after every shooting tragedy in this country, by encouraging armed insurrectionists at state houses and protests, he has made us all less safe."

As voters prepare to head to the polls or mail in their ballots this November, Watts reflects on a factor that helped put Trump in the White House four years ago. "I think it’s really important to remember that 53% of white women voted for Donald Trump in the last election, and it is on us to tear town the systemic racism in this country."

More Like This
Can States Ban The Abortion Pill? FDA Rules May Make That Hard
Meghan Markle Calls On Men "To Be Vocal" In The Aftermath Of Roe v. Wade Ending
AAP Says Kids Will Face "Grave Consequences" Now That Roe V. Wade Is Overturned
Here’s How To Fight For Abortion Rights