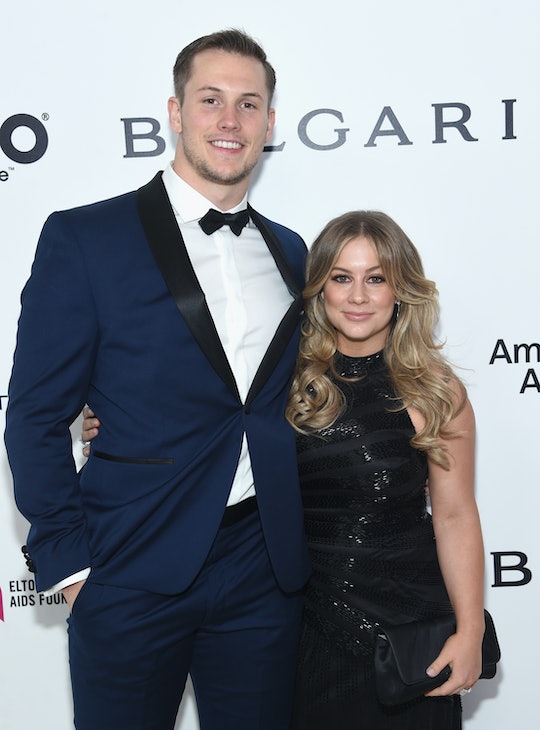 Shawn Johnson On The "Pressure" To Do A Gender Reveal

Preparing for a new baby is an exciting time. Between showers, sprinkles and keeping friends and family updated on your pregnancy through social media, there's a lot to do. However, mom-to-be Shawn Johnson says the "pressure" to do a gender reveal was a really big turn off to her and her husband, and they ended up deciding not to share the baby's sex at all.

Johnson, who is expecting her first baby with Andrew East this fall, has been really open with fans about her journey. She was transparent about suffering a miscarriage last year, and even opened up about the complications she experienced earlier in this pregnancy. She and East have shared everything from weekly updates to baby shower pictures to opening a new Instagram account for their baby. Needless to say, the couple have been really generous with their time and keeping those who care involved and informed.

However, during an interview with Zack Peter and Abigail Fraher on The Adulting Podcast, Johnson opened up about the undue pressure they felt to do a big gender reveal, and why they opted not to. "We're still pretty set on not finding out the sex, so, I feel like we've made it 30 weeks, I feel like we're going to go all the way now... We felt so pressured to do this epic gender reveal I think that actually pushed us in the other direction," she said.

Though gender reveals are popular now, they weren't always. In fact, it wasn't until the 70s and 80s that the technology to even have an ultrasound and identify the baby's sex became available to new moms, Redbook explained.

Though there have been different traditions and rituals centered around the process of pregnancy and birth since time immemorial, and learning the sex itself has been happening for decades, the "gender reveal party" is a pretty new practice, and is inextricably linked to social media. In most cases, the parents will gather friends and family and issue some kind of extravagant display such as releasing balloons or cutting a cake to reveal either pink or blue.

Jenna Karvunidis, who NPR reported is often credited with "inventing" the concept of the gender reveal (her pink cake went viral initiating the trend) said she did it only because she "liked to throw parties" and "thought it would be fun," but that over time, her perspective on gender itself has changed.

"Who cares what gender the baby is? I did at the time because we didn't live in 2019 and didn't know what we know now - that assigning focus on gender at birth leaves out so much of their potential and talents that have nothing to do with what's between their legs," she wrote on Facebook. "PLOT TWIST, the world's first gender-reveal party baby is a girl who wears suits!"

Though Johnson didn't specifically mention the gendered aspect of the party being her issue, it definitely is for a lot of people, who think we should be moving away from binary thinking when it comes to identity, and more toward inclusivity. Be this as it is, Johnson does still bring up a great point which is that every mother's pregnancy and birth journey is unique, and there's no one "right" way to prepare, or announce, any part of it.