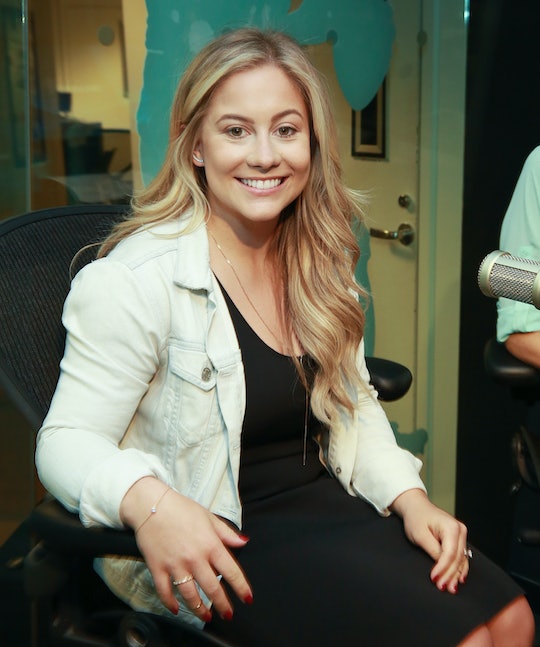 Shawn Johnson is busy soaking up motherhood these days, having just welcomed her first child, a girl, with husband Andrew East. And although the newborn's name isn't known yet, fans have caught a few glimpses of the new addition, including this snap of Shawn Johnson's baby daughter giving her dad a "high-five." It's seriously too cute for words.

Johnson went quiet on Instagram on Oct. 30, which was odd for her given how often she shares content with fans. So many people assumed the former Olympic gymnast had gone into labor, a theory that was ultimately correct. Johnson has yet to reveal her baby girl's actual birthday, but it probably fell somewhere between Oct. 31 and Nov. 4., when the new mom finally confirmed her daughter's arrival. "You are our everything," she captioned a sweet shot of the infant. "Welcome to the world baby girl."

The couple also thanked fans for giving them the opportunity to bond with their new baby, with East sharing, “We’ve just been cuddling and talking and having family time.”

Now that the two have had some time to snuggle with their little one, they're sharing more pics and videos to Instagram. And on Wednesday, Johnson shared the cutest snap of "baby East" giving her proud dad a "high-five."

So sweet right? It's clear the little girl and her dad are BFFs already.

Cuteness aside, many fans are curious about when the couple will reveal their little one's name. And interest is at an all-time high given Johnson revealed their plans to share their "birth vlog" in the near future.

"When will the birth vlog be up??" someone asked. "You're killing us!!"

Another fan commented: "I've been waiting for this baby's name for a long time."

"Does baby have a name?" one person wrote.

To be honest, I share in this eagerness because I find celebrity kid baby names endlessly interesting. I think it stems from having preconceived notions of a famous person's tastes, leaving me surprised more often than not about their choices. And then there are so many unique monikers to keep up with, like Maple (Jason Bateman's daughter's name) and Slash Electric (Amber Rose's son).

Of course, Johnson and East have no obligation to share their daughter's name just yet, especially since they're just getting into the swing of parenthood.

Speaking of first-time parenthood, Johnson expressed worry about becoming a mom in an interview with Refinery29, sharing, "I’m worried that I’m not going to be a good mom. I’m worried that my baby is going to need something I can’t give them. There’s a million worries that go through your head."

It's possible Johnson's fears were spurred by mom-shaming, as she described in conversation with What To Expect: “It just comes with everyone having their own opinion and their own stance on things, which is totally fine, I respect it. But I feel like there is a stigma to pregnant women, to moms, to be perfect, and to do everything as other people see is right, which is complicated because nobody agrees on what’s right, so it causes a lot of tension."

For now, however, it appears Johnson is not worried about anything except spending time with her adorable baby, high-fives and all.