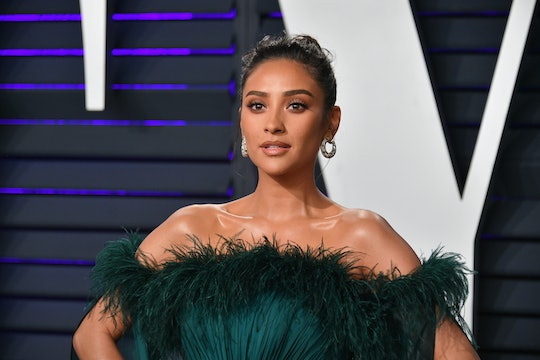 In 2019, a brand new Pretty Little Liar will be born. This is because one of the stars from the show just announced they're expecting — and the news cannot be any more exciting. People are freaking out that actress Shay Mitchell announced she's pregnant with the most stunning Instagram post, ever. A congratulations is in order for the mom to be!

Needless to say, Mitchell dropped a huge bombshell on Friday when she took to Instagram to share a photo that no one was expecting. The actress and social media star had posted a completely normal Instagram feed leading up to her big announcement — and judging from her photos alone, it was impossible to tell that she had some pretty major news to share, especially pregnancy news.

But, she went and surprised everyone when she shared the most gorgeous photo of her topless with her pregnancy bump out there for everyone to see. As if anyone had any doubts about whether or not she is pregnant, Mitchell confirmed the news in the caption of the post — she is six months pregnant, according to People, and expecting her first child with her boyfriend, Matte Babel.

"Does this mean I'm allowed to drive in the carpool lane at all times now?," she asked her followers. Not quite, but she'll get there eventually.

Even Mitchell's famous friends can't get over how exciting this news is.

And the rest of Mitchell's feed is filled with just as many people wishing her well. You can't deny that people are seriously happy for Mitchell, especially since she seems glowing with joy, too. Mitchell also announced her pregnancy in a video on her YouTube channel, where she talked about her hesitancy to share the news. "When you're in the public eye, there are some things that you just want to keep a secret until you feel ready," Mitchell said in the video. "This, for me, has been the hardest."

But, keeping her pregnancy to herself wasn't the easiest decision for her. In the video, Mitchell openly struggles with finding the right clothes to hide her bump, and tells the camera that keeping it a secret for so long is "isolating." "I think pregnancy is awesome, for the most part, but it's also really f— lonely," she said.

The best thing is, Mitchell won't be alone in her journey. Starting on Wednesday, July 17, Mitchell will be uploading pregnancy vlogs to her YouTube channel every other week, where fans can watch her experience her pregnancy for the first time. She seems so excited from the sound of it. I mean, who wouldn't be excited to no longer have to hide their pregnancy from the rest of the world?

Mitchell's excitement is so much more significant, too, especially after she experienced a miscarriage last year. Mitchell revealed on Instagram in January that she had a miscarriage in 2018, according to Harper's Bazaar. "The support and affection so many of you show me lifts me up during even my darkest days, one of which happened last year after I lost the child of my hopes and dreams," she wrote.

But her hopes and dreams are coming true now that she is six months pregnant. After experiencing some loneliness and hesitation to share her news, Mitchell seems so relieved to finally let the cat out of the bag — and she should feel relieved. Congratulations to the very excited and happy couple.