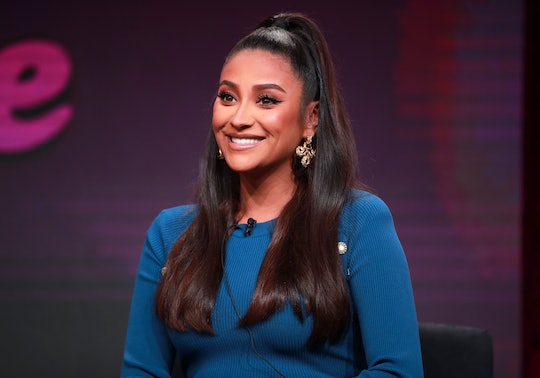 Nearly a year after revealing she'd previously suffered a miscarriage, Shay Mitchell has given birth to her first child with boyfriend Matte Babel. On Sunday, Oct. 20, the Pretty Little Liars alum and You star announced that she has officially welcomed a baby girl with a sweet photo on Instagram.

More Like This
Amy Schumer Shared An Emotional & Sweet Post On Gene’s 2nd Birthday
Mandy Moore’s Son & Hilary Duff’s Daughter Had The Cutest Play Date Ever
Meghan Trainor Shared A Video Montage Of Her Newborn That'll 100% Give You Baby Fever
A 25-Year-Old Mom Thought She Was Pregnant With 7 Babies. She Gave Birth To 9.

"Never letting go...," the new mom captioned a photo of her hand holding her newborn daughter's. The couple has not yet revealed when exactly their baby girl was born or what name they've given her, but hopefully more heartwarming Instagram posts in the future will share those details.

Mitchell's fans and fellow celeb friends quickly took to her comments section of the post to share their excitement and congratulations. "Omg babe. Congratulations," actress Vanessa Hudgens wrote. And Nia Peeples commented, "I dreamed about you giving birth last night... welcome to motherhood and the deepest of all feelings."

Mitchell announced she was pregnant on June 28 by sharing a photograph of her baby bump on Instagram. "Does this mean I'm allowed to drive in the car pool lane at all times now?" she wrote in the caption.

She also announced the news with a video titled "Guess Who's Preggers" to YouTube, in which she talked about trying to keep her pregnancy under wraps for the first few months. "When you're in the public eye, there are some things that you want to just keep a secret until you feel ready," Mitchell said in the episode's intro. "I didn't want to come out on social media so early on," she can later be heard telling a makeup artist in the video. "I'm going to be so happy when this comes out. I can be pregnant. I can like, not suck my stomach in."

While Mitchell was hesitant to take her pregnancy public until she was fairly far along, she also discussed how lonely hiding had made her feel. "Months of hiding, it's been a really lonely journey," Mitchel said about her decision to turn her pregnancy into a YouTube series. "It didn't feel right to just put up a photo and be like, 'I'm pregnant' and have people just think everything has been peaches and rainbows. This is real life and I want people to come along with me on this journey in real time."

Mitchell is, unfortunately, no stranger to the hardships of pregnancy. In January, six months before sharing her pregnancy, Mitchell revealed she'd suffered a miscarriage in 2018. "Lastly, although it was an amazing year, it didn’t come without some hardships," she wrote in an Instagram Story at the time that prefaced a photograph of a sonogram with a broken-heart emoji over it, according to People.

While Mitchell and Babel have welcomed their first child together, the couple initially had some disagreements over their birth plan. In September, an episode of Mitchell's pregnancy YouTube series revealed that Babel was against Mitchell receiving an epidural, despite the fact that she felt "terrified of giving birth."

"As a woman, your body is genetically engineered to get through birth," Babel argued. "Well listen, next time you can do this," Mitchell joked.

Mitchell hasn't shared whether they have plans to make their new baby girl a big sister in the next few years, but hopefully these new parents are enjoying cuddles and precious time with their newborn.