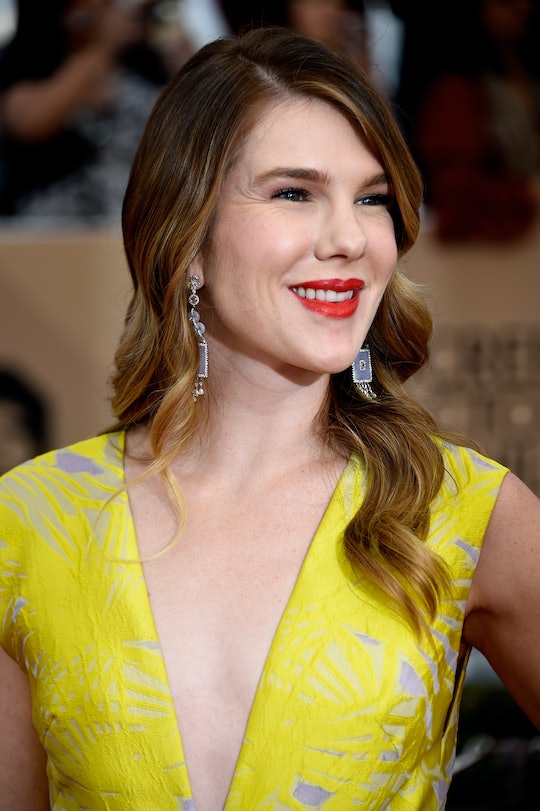 Shelby Died On 'AHS: Roanoke' & She Wasn't The Only One

Ever since American Horror Story Season 6 started in on its second half, it's been a bloodbath. Every episode has featured one or more characters meeting a creatively violent end, and "Chapter 8" was no exception. The rising blood moon means that the ghosts who haunt the farmhouse are corporeal enough to kill, but they aren't the only villains to contend with. The real-life version of the Polks, the cannibalistic hillbillies who live in the woods, are another seemingly inescapable obstacle. But none of those exterior threats are responsible for what happened to Shelby. Shelby died on American Horror Story: Roanoke, and she chose to end it all by her own hand.

Last week, Shelby was the victim of a brutal attack by Agnes in full faux-Butcher mode, but she committed an even more heinous crime. When she found Matt in the arms of the strange witchy woman who seduced him when they first lived in the house, Shelby lost it. She bashed his head in with a crowbar, and that proved to be the end for her too, in a way. Shelby couldn't live with what she'd done. She'd brutally murdered the only man she'd ever loved. So after another round of ghost attacks, backed into a corner, Shelby had lost all hope. She felt she had no reason to live anymore and decided to take her own life by slashing her throat with a knife.

As soon as My Roanoke Nightmare's sequel series began, the audience knew that things weren't going to end well. An intertitle explained that with the exception of one unrevealed person, everyone who entered the house for the filming of Return to Roanoke: Three Days in Hell met an unfortunate end. The show has been living up to that, too; it feels like almost as soon as a character is reintroduced, they're done for. However, Shelby's demise is the clear result of all of the trauma she was still dealing with from her first stay in the house. Though she survived last time, returning was obviously a mistake.

The swarm that descends on Shelby and Dominic is so overwhelming that it brings home how trapped and panicked Shelby must feel. She came back to the house in the first place in a vain attempt to reunite with Matt, and when she realized that was never going to happen, she snapped. Then there was no escape from the constant barrage of supernatural murderers; the ghosts drove her and Dominic back to the very place they started. They were trapped in a loop, and there was no way out.

Matt and Shelby's deaths close out their part of the story. Though they were able to leave the house once, the horrors they lived through stayed with them, and set off the chain of events that led to everything that followed. They escaped the house once, but they never really left.