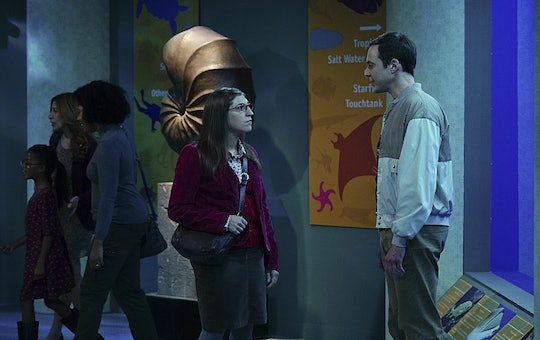 Sheldon & Amy From ‘Big Bang' Are Finally (Maybe) Gonna Do It — & You Thought It'd Never Happen!

If you’re wondering why the word “coitus” is trending right now, Entertainment Weekly is reporting that The Big Bang Theory’s Sheldon and Amy will have sex in an upcoming episode. I repeat: Sheldon and Amy (or “Shamy,” to superfans) are finally taking a trip to the bone zone after four painfully awkward years of dating. “But wait,” you say, “aren’t they broken up right now?” (Unless you don’t watch the show, in which case I don’t understand why you’re reading this, but carry on.) The short answer: Yes, Amy did in fact break up with Sheldon in the Season 8 finale this past May. But things aren't completely over.

We later learned that Sheldon had been planning to propose to Amy, but she’d already moved on, and was dating a man named Dave in Season 9, played by guest star Stephen Merchant. On the most recent episode, Sheldon tried dating someone else for a hot minute, but failed, and Amy dumped Dave when she found out he was actually Sheldon’s biggest fan. That leaves them both single and ready to mingle with each other again. And apparently they will, because according to EW, executive producer Steve Molaro has just issued the following statement: “After over five years of dating, we felt the time was right for Sheldon and Amy to finally consummate their relationship. And we’re so excited for the audience to see the journey over the next several episodes.”

Hallelujah! The Big Banging will take place on the December 17 episode, which was shot on Tuesday night in front of a live audience. (I know; I thought it was canned laughter, too.) Sensing a leak was likely, the producers chose to get out in front of the news now. So yup, it looks like you’ll be watching nerd sex next month. Until then, let’s bid our time by looking back on Shamy’s weirdly sweet relationship, gif-style:

More Like This
What Exactly Are Minions, Anyway ?
Some Movie Theaters Are Banning Teens Dressed In Suits As Part Of Viral 'Minions' Trend
12 Of The Best Hallmark Christmas Movies To Watch In July
Jenny Han Wanted Both Moms & Teens To Feel Seen In 'The Summer I Turned Pretty'