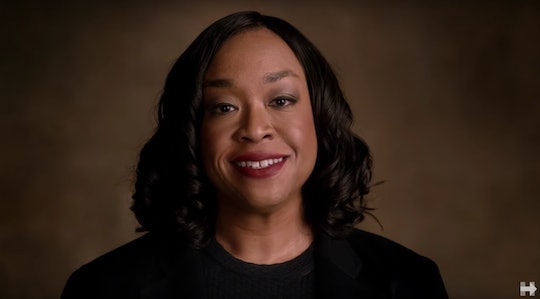 Hillary Clinton recently gained a few powerful supporters — Olivia Pope, Meredith Grey, and Annalise Keating — or rather, the women who play them on Shonda Rhimes's popular ABC shows. In a new campaign ad, Shonda Rhimes and her leading ladies endorse Hillary Clinton, and it's pretty amazing. Getting the high-profile support of Kerry Washington, Ellen Pompeo, and Viola Davis could be helpful to the former Secretary of State as she tries to fend off the surging Vermont Sen. Bernie Sanders in a Democratic primary that just won't end.

The ad, directed by Tony Goldwyn (otherwise known as President Fitz on Scandal!), is shot simply, with the four women taking turns speaking against a dark background, all the better to make their message stand out. "Every day I wake up and play a brilliant, get-it-done woman," Kerry Washington says, referencing her character in Scandal. Viola Davis notes that her character on How To Get Away With Murder is "overqualified" and "obsessively fights for justice," while Ellen Pompeo says that her Grey's Anatomy character "gets knocked down and always gets back up." Hmm, does that sound remarkably like anyone involved in the current presidential election?

"Our characters are on television," they say, "but the real world has Hillary Clinton." They go on to call her a "champion for all of us" before declaring, "I'm with Hillary."

The ad is running in advance of some very important primaries on Tuesday in Florida, Illinois, and Ohio. After Sanders' upset win in Michigan, the Clinton team must be feeling more nervous about the results. But this ad is a big one for Clinton. After all, Rhimes' three shows, which make up ABC's Thank God It's Thursday (or TGIT) night, are almost absurdly popular. Though they're down in the ratings this year, they still usually draw between five and 10 million viewers each week, and they tend to dominate the cultural conversation, with Davis winning a 2015 Best Actress in a Drama Emmy for her work on How To Get Away With Murder.

Reaction to the ad has been mixed. Some are thrilled to see their favorite actresses endorsing their candidate of choice.

Others would much prefer to keep their TV shows separate from real-life politics.

Whatever your thoughts on Clinton, there's no denying that the ad is a big deal for her. We'll see after Tuesday, though, if it's big enough to stave off Sanders' unexpected surge.