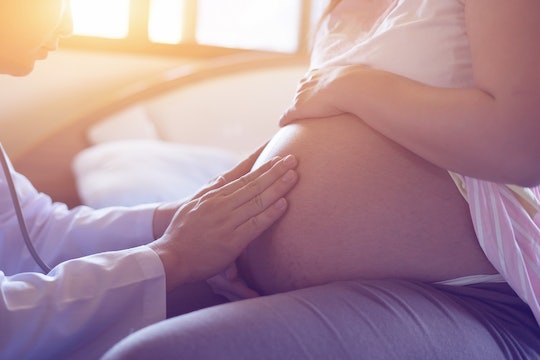 Having a baby can be an exciting time in a person's life, but it can quickly turn scary for parents whose babies are admitted to Neonatal Intensive Care Units (NICUs) post-delivery. And while there are many reasons why a child might be admitted to the NICU, researchers at the National Institutes of Health (NIH) believe short-term air pollution exposure plays a key role.

The study, led by Pauline Mendola, Ph.D at the NIH, found that babies born to people who were exposed to higher levels of air pollution the week leading up to giving birth were more likely to be admitted to the NICU. Chances of being admitted to the NICU increased from 4 percent to as high as 147 percent depending on the type of pollution, a press release related to the findings stated.

"Short-term exposure to most types of air pollutants may increase the risk for NICU admission," Dr. Mendola said, according to the release. "If our findings are confirmed, they suggest that pregnant women may want to consider limiting their time outdoors when air quality advisories indicate unhealthy conditions."

In conducting the study, researchers analyzed data from the Consortium of Safe Labor, which put together info from more than 223,000 births at 12 sites in the United States from 2002 to 2008. Researchers used records from more than 27,000 NICU admissions, which they compared alongside data from the Community Multi-scale Air Quality Modeling System, data that's used to estimate environmental pollution concentrations in the U.S., according to a press release. Through their analysis, researchers were able to determine the air quality of where each birth resulting in a NICU hospitalization occurred.

The study found that "exposure to high concentrations of organic compounds was associated with a 147 percent increase in risk of NICU admission," while "elemental carbon and ammonium ions presented similar increases in risk (38 percent and 39 percent, respectively)," according to the NIH. Additionally, "nitrate compounds was associated with a 16 percent higher risk of NICU admission."

Interestingly enough, the chances of NICU admission "increased significantly with exposures to traffic-related pollutants on the day before and the day of delivery, compared with the week before delivery," according to the NIH.

Researchers weren't able to determine the link between air pollution exposure and NICU stays, but they theorize it has something to do with inflammation. "Pollutants increase inflammation, leading to impaired blood vessel growth, particularly in the placenta, which supplies oxygen and nutrients to the developing fetus," according to the NIH.

NICU stays aren't forever, but the effects of pollution on babies (think climate change) can be. A February study from the Journal of the American Heart Association, for instance, found that exposure to hotter temperatures in the early weeks of pregnancy could increase a baby's chance of developing fetal abnormalities. Researchers working on the study said that heat exposure can "cause fetal cell death or interfere with protein synthesis via heat-shock proteins and induce severe fetal malformations," according to MedPage Today. The big problem with these ongoing defects? It could be the consequence of climate change and global warming.

Not to mention, air pollution has also been linked to instances of asthma in children. Researchers at George Washington University Milken Institute School of Public Health in Washington, D.C. found that nitrogen dioxide — a major gaseous output found in energy production, traffic pollution, and other air pollutants — can lead to asthma in young kids. The research looked at data from 125 cities in 194 counties between 2010 and 2015, according to findings published in Lancet Planetary Health. The data featured population statistics, new asthma cases in people under 18 years old, and nitrogen dioxide measurements from the ground collected via satellite transmissions, the study said.

Through all those elements, researchers were able to determine that a whopping 4 million cases of asthma in children were linked to air pollution. That amounts to about 13 percent of all pediatric asthma cases the world over, or 11,000 new cases every day of the year, The Guardian reported.

Parents will do anything to protect their children, but it can be increasingly difficult when factors beyond your control come into play. Pregnant people can't avoid going outside or keep their kids in a bubble. What they can do, however, is take small steps towards protecting the planet in the hopes of avoiding complications down the line.