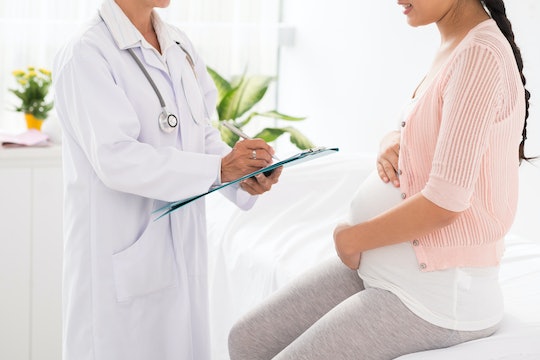 Summer is long gone, which means the days are now getting shorter and colder. Although some people are only mildly inconvenienced by drastically shorter days, they can have some real side effects for others. Recently, researchers found that shorter days in late pregnancy may be linked to postpartum depression, and here's why.

There can be a lot of negative stigma attached to postpartum depression, but it's not rare. Approximately one out of every nine women experience symptoms of postpartum depression, according to CDC research. The CDC also noted that postpartum rates can drastically differ depending on age, race, and ethnicity. As an example, in its report, the CDC noted symptoms were highest among women who were 19 years old or younger, as well as in American Indian or Alaskan Native women.

What exactly causes postpartum depression, though? It's hard to find a definitive answer, but new research suggests some type of environmental link.

Reduced exposure to natural light has long been linked with depression in adults. Conditions like seasonal affective disorder (SAD) are a good example. For many, SAD appears during late fall or early winter and disappears as the days become longer and sunnier, as noted by the Mayo Clinic.

Knowing this, researchers decided to examine the effects of reduced natural light during pregnancy or after it. Their results have been published in the Journal of Behavioral Medicine.

A California-based team of researchers worked with data from 273 women who were expecting their first child, according to the study. They divided days into four categories, as noted by MD Magazine: short (Nov. 5 to Feb. 4), lengthening (Feb. 5 to May 4), long (May 6 to Aug. 4), and shortening (Aug. 5 to Nov. 4).

Researchers found that days growing shorter during a women's third trimester or at birth proved significant for higher depressive scores over time, according to MD Magazine. The risk for depression was highest among those whose final trimester came during the shortening day period — 35 percent — the study reported.

For the researchers, these results point at a need for clinicians to be more aware, and begin recommending frequent exposure to daylight or other forms of light therapy, as noted by the study's conclusion. Researchers also wrote that clinicians should consider "vitamin D supplementation for all women regardless of light exposure".

"Initiating light treatment in the late third trimester when seasonal day length is shortening may serve to minimize postpartum depression symptoms in high-risk mothers during the first three months postpartum," the authors wrote in their study.

Further research still needs to be done, particularly in other geographic locations. But, this study shows promise for understanding more about postpartum depression, and fighting some of the stigma surrounding it.