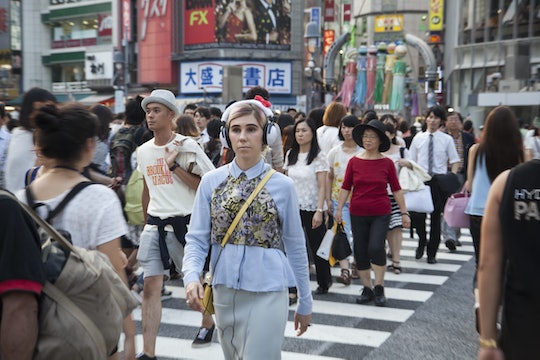 The Girls are growing up. Since the first season of Girls, viewers have watched Hannah, Jessa, Shoshanna, and Marnie make a series of mistakes. At the time, they thought they were making the right decisions, but they usually were not. It wasn't until recently that it seemed that some of them — not all of them, ahem, Marnie — were heading in the right direction. And who of the four is "most improved"? Well, when Shoshanna decided to move to Japan on Girls Season 4 for work, instead of staying in New York with her boyfriend, she got the gold star and then some.

Since moving to Japan, Shoshanna has fallen in love. Not necessarily with a person — although there is definitely a romance forming with her coworker Yoshi — but with her surroundings. She's in her element, and as she tells her friends, she feels like she is home. So, when Abigail, her stateside boss, calls her and fires her, Shoshanna is devastated. One person that is not devastated is Scott, her soup boyfriend that told her to not go to Japan in the first place. Scott sucks.

After receiving the notice that she'll have to return to the United States, Shoshanna is clearly crushed. She seems to feel alive in Japan, like she has purpose. She has friends, she has a love interest, and she doesn't have to face the things she might or might not be running away from at home. Which is why she decides to not leave.

Despite not having a job, Shoshanna makes the independent decision to remain in Japan, leaving Scott alone at the airport with a bouquet of flowers. Hopefully, this is the last hint the guy needs to know that they're over. This move, while risky, is something that I feel Shoshanna Shapiro of Girls has been building up to. We saw her make the fiercly independent decision to go to Japan last season, and now when times are tough, she still chooses to do what makes her happy. She's not basing decisions for her life on anyone else, which is definitely a sign that this girl has become her own person and can totally take on whatever gets thrown at her. As she said in Season 1, "I am woman, hear me roar."