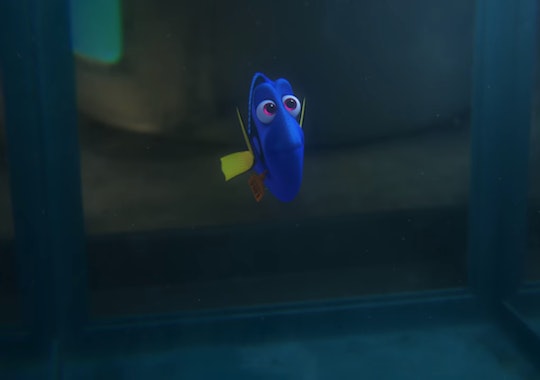 Finding Dory, the long-awaited sequel to 2003's Finding Nemo, finally hits U.S. theaters on Friday, and it's expected to be another win for Pixar's near-perfect track record. But while Pixar's films are generally huge successes, kids of various ages sometimes respond to them differently. Inside Out went a little over the heads of some super-young viewers, and I personally am not over the trash compactor scene in Toy Story 3. So should a 5-year-old see Finding Dory? Thankfully, the film will appeal to even the littlest moviegoers.

More Like This
Here's Everything We Know About 'Black Panther: Wakanda Forever'
Every Adorable Photo Of Prince Louis
Josh Duggar's Family Has Spoken Out As He Faces Child Pornography Charges
These 35 Photos Of Prince William & Kate Middleton Are As Close To Royal PDA As It Gets

Finding Nemo and Finding Dory have similar plots; in the first movie, a fish dad is separated from his fish son and assembles a group of friends to help the family reunite. In the sequel, a fish goes on a quest to reunite with her parents. Those familiar with the original will recall that Dory, the blue tang voiced by Ellen Degeneres, has virtually no short-term memory, a condition inspired by a myth about goldfish that's often played for laughs. However, now that Dory has her own film, her condition's taken more seriously, framed as a disability that's sometimes frustrating, sometimes inspiring, and ultimately, something to be accepted rather than overcome.

Kids with disabilities will find a a role model in Dory, who learns that her memory doesn't make her "less than"; it just makes her different, and sometimes what others perceive as a shortcoming can actually be an asset (not remembering simple instructions, for example, teaches her to rely on her instincts). Typical kids can also learn a practical lesson in tolerance; as The Verge pointed out, when Dory's friends become annoyed with her forgetfulness, it's left up to them to get over it and never treated as Dory's problem to address. As for kids who are too young to pick up on the moral without some post-movie coaching from a parent, there are still plenty of laughs to entertain them for the 105-minute run.

Finding Dory is also that rare kids' movie without a "bad guy." There's a brief encounter between Nemo and a giant squid, but the main antagonist is Dory's own self-doubt, which she eventually conquers with the help of Ed O'Neill's grumpy seven-legged octopus, Hank (who Dory dubs a septopus – hey, a combination math and Latin lesson!). Finding Dory is an example of a movie sequel done exactly right: rather than watering down the original for an easy cash-grab, it builds upon the message of perseverance, independence, and the importance of family, which fans of any age can understand.