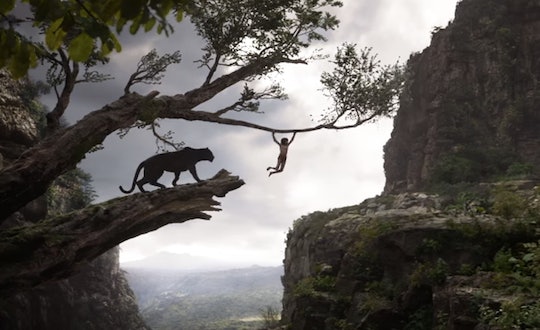 Should A Toddler Watch 'The Jungle Book'? The Classic Cartoon Has Been Totally Remade

Disney has rebooted it's animated classic The Jungle Book, and both new and longtime fans are giving it the thumbs up. While it's still a Disney film made for kids, this new version of the story takes a much darker approach. It's the brainchild of the team that brought us The Pirates of the Caribbean, and like that film, this one greatly depends on lifelike, mind-bending CGI, physical comedy, and a strong narrative. So, should a toddler watch The Jungle Book? There are definitely some scary moments in the film.

Just like the original, the scariest moments involve the villain, Shere Khan. Unlike the original, this version takes much more time developing that character, his backstory, and what he has against Mowgli. This makes the narrative much more compelling and complex, but it also makes the film more sophisticated and dark — perhaps too dark for a toddler, but each parent should decide what their child can handle, because the film really is just about a boy and animals. Shere Khan's character is driven by hatred and revenge, though, and the danger that he poses to Mowgli feels very real.

CGI has come a long way in the past few years, and the animals, though fantastical and human-like, are incredibly convincing and realistic. While this adds to the magic of the film, it could scare some children who have trouble fully grasping the fantasy. If they are already afraid of animals, this film is not a good choice for them. Kaa the snake is particularly scary, despite his humor. There are more than a few startling moments, too, when things pop out and the whole theater seems to jump out of their seats. While an older child may be thrilled by that suspenseful feeling, it may overwhelm a toddler. Though if parents discuss the film with their toddler beforehand, then the toddler might enjoy it and be totally OK.

Andrew Barker, a reviewer for Variety reminded viewers that this is a film for children. He wrote, "Maintaining the buoyant heartbeat beneath all the digital flash, [director] Favreau never loses sight of the fact that he’s making an adventure story for children." The film was given a PG rating. There are moments in the film that are, in Barker's words, "just short of something that would trouble children’s sleep."

If your child is prone to nightmares and has an active imagination, it may be best to wait a few years before seeing this film. When it was first released in India, censors went as far as to brand the film too scary for kids, according to The Guardian. They said the animals were too "startling." They've since been mocked for that harsh report, though. The Jungle Book's story is an excellent classic that is sure to entertain kids, but parents should just be prepared to prep their toddlers so that the lifelike-features of the animals don't make them too jumpy.