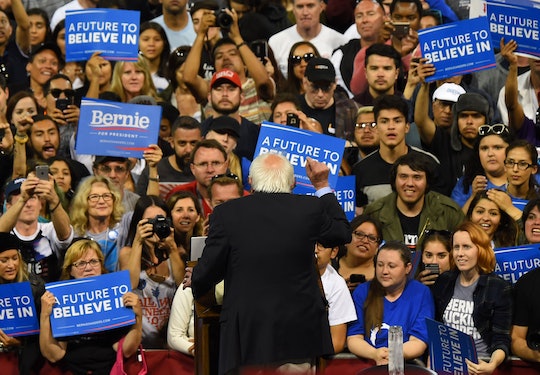 Should Bernie Sanders Apologize For Violence At His Rallies? Yes & No

During the primary election, it seems like escalate very quickly. Little comments become heated exchanges and insults. Fierce support from followers can morph into violence in an instant and then things can take a turn for the worse. For example: what happened at a recent Nevada Democratic Party convention between Bernie Sanders and Hillary Clinton supporters where comments turned into violence. But should Bernie Sanders have to apologize for violence at his rallies? Or are Democratic leaders being too hard on him?

There are multiple sides to the argument. First, what kind of violence are we talking about? According to CNN, at a recent Nevada Democratic Party convention, Sanders supporters reportedly said Hillary Clinton's backers had "subverted party rules" and shouted down pro-Clinton speakers. They also reportedly sent threatening messages to Nevada Democratic Party Chairwoman Roberta Lange after her phone number and address was posted to social media.

This led to Democratic National Committee Chairwoman Debbie Wasserman Schultz and several other top Democratic party leaders to demand an apology from Sanders. But Sanders refuses to apologize. In a statement on his website, Sanders said:

Within the last few days there have been a number of criticisms made against my campaign organization. Party leaders in Nevada, for example, claim that the Sanders campaign has a "penchant for violence." That is nonsense. Our campaign has held giant rallies all across this country, including high crime areas, and there have been zero reports of violence.

This is true. But while Sanders might not be responsible for inciting the violence, and just because his campaign hasn't always been violent (like certain Republican candidates), it doesn't mean he shouldn't have to address the issue either.

In his own defense, Sanders added,

Our campaign believes in non-violent change and it goes without saying that I condemn any and all forms of violence, including the personal harassment of individuals.

But what about on the other side? Has Donald Trump apologized for violence at his rallies? In March, the Huffington Post found that there had been 58 arrests and citations connected to Trump events since late February with 25 reported incidents of physical violence. At one Trump event in Arizona in March, a protester was reportedly kicked and punched by a Trump supporter. In another instance, Trump was caught on camera supposedly encouraging supporters to "knock the crap out of" any protestors who were going to throw tomatoes at him. And while Trump has stated he doesn't condone the violence, he hasn't outright apologized for the violent acts of his supporters, either.

So should Sanders have to apologize for the actions of his supporters? While he isn't responsible for inciting it in the same way that Donald Trump allegedly is, violence is violence. It doesn't matter who incites or whether it comes from a place of hate or frustration, when it comes down to it, it's scary. Therefore while Sanders has no control over the actions of his supporters, especially those in one specific place, an apology could set an example for the rest of the primary campaign trail.

With the months dwindling down until the Democratic National Convention, supporters can only hope to see more acts of peace from every campaign at every stop — and less violence.