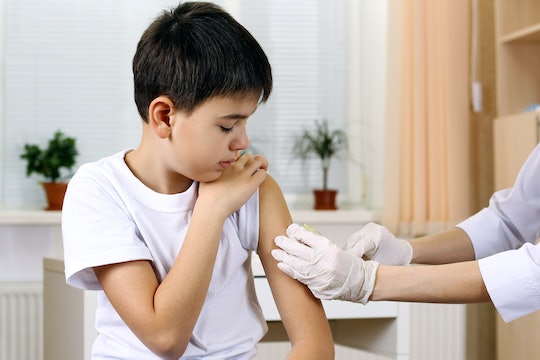 Should Boys Get The HPV Vaccine?

Some parents struggle with the decision to get their babies the recommended vaccines from birth through early childhood. So making the decision to give your child an elective vaccination to protect against a sexually transmitted disease, or STD, is a topic that parents should thoughtfully consider before making the choice. Many commercials and advertisements for these type of vaccines often feature young girls, who are considered most at risk, but this doesn't mean boys are immune. Parents of boys should be asking questions about these shots. Should boys get the HPV vaccine? Or is this one your son can pass on?

Human papillomavirus, more commonly known as HPV, is a very common sexually transmitted infection that has more than 100 strands and is believed to effect most sexually active people, according to Planned Parenthood. Since it is so widespread, it is thought that giving your child the vaccine for HPV before they become sexually active can protect them from some of the side effects associated with the infection. Although a common symptom of HPV is genital warts, this is not the primary concern or motivation of those encouraging parents to vaccinate their sons, according to the website for Very Well. It's actually the side effects of this virus that pose a potential threat.

The big push for early vaccination is because the shot is only effective if given before your son contracts HPV. The Center For Disease Control and Prevention's (CDC) website recommends boys receive the HPV vaccine around 11 or 12 because of the potential consequences related to the virus. According to the CDC, more than 9,000 males are affected by cancers caused by HPV infections every year. Commonly, these are cancers of the mouth, throat, anus, and penis, which are believed to be avoided if the vaccine is administered in time. Preventing boys from getting HPV can also help reduce the number of girls who are infected with the virus through sexual contact.

Aside from these links to certain cancers, doctors are still debating whether or not giving boys the HPV vaccine is necessary. According to the website for ABC News, experts can seem to agree on vaccinating boys for HPV since there has been so little unbiased research done to test the overall effectiveness as it relates to the long term health of both males and females.