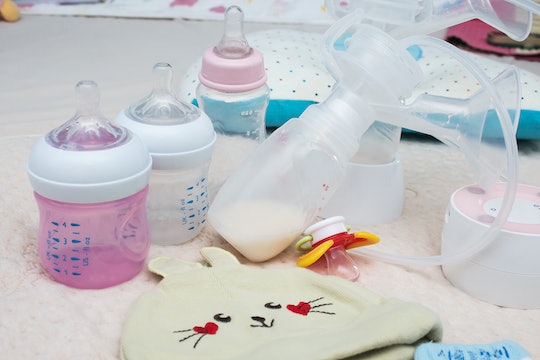 So, You Got Yellow Breast Milk Huh?

If your baby has been feeding directly from your breast, you might be surprised by what your breast milk actually looks like. The first time a mom expresses her milk, it may not look at all like what she imagined. Lactation consultants and doctors are often asked questions such as "Should my breast milk be yellow?"

According to Very Well, the color and consistency of breast milk can vary for several reasons. The milk that flows at the beginning of a feeding tends to be clear or have a slightly bluish tint. This milk is called the foremilk, which is thin, low in fat content, and high lactose content, according to Breastmilk.com. As the feeding or pumping progresses, the fat content of the milk increases, which can change it to a creamier, whiter milk, which may have a yellow tint.

During your very first week of breastfeeding, your body produces a nutrient-packed first-milk known as colostrum. Very Well noted that the color of colostrum can vary from clear and thin to yellow or orange and thick due to the high levels of beta-carotene. As your milk is changes from colostrum into mature breast milk, it can be a mixture of colostrum, foremilk, and hindmilk, which Breastfeeding Basics refers to as transitional milk. It isn't uncommon for expressed transitional milk to look a little yellow.

Another reason your breast milk may look yellow (or green, or orange) has to do with your diet, according to Kelly Mom. Eating a lot of greens or foods rich in beta-carotene can affect the color of your breast milk. Your milk might also be discolored if you're eating foods that contain a lot of artificial food dyes such as orange sodas or red fruit drinks.

So, if your milk was white this morning and looks yellow this afternoon, don't freak out. Breastfeeding Basics noted that it's completely normal for the appearance and color of your breast milk to change from day to day, from feeding to feeding, and even from beginning to end of the same feeding.