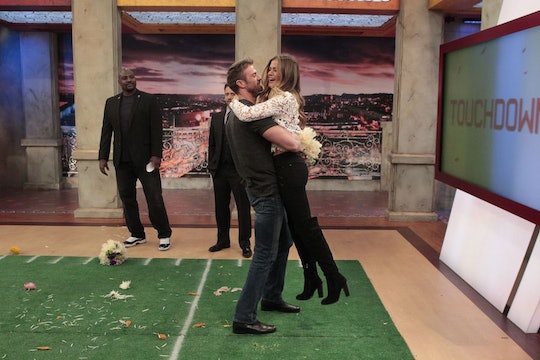 Should Chad Leave 'The Bachelorette'? JoJo Needs Someone Mature

The second episode of The Bachelorette Season 12 has put producers in a weird spot. Do they, or don't they just change the name of the show to The Chad Show? That's what the show was all about, after all. This season was supposed to be all about JoJo Fletcher finding love, but it's becoming more and more obvious that it is all about Chad finding a place to become the most hated Bachelorette contestant of all time. Which leads me to question if Chad should leave The Bachelorette, or if he should be kept around. Ultimately, it's JoJo's decision, but who says we can't debate the topic as fans?

In Monday's episode, JoJo admitted that she found Chad's honest and often off-putting behavior to be attractive. She liked that he didn't sugar coat his relationship with the other men and that he said what he was really feelings (i.e., her being naggy). Maybe she didn't exactly like what he was saying, but the point was made: JoJo likes the bad boys. There's nothing wrong with that, is there?

No, of course not. But, there is something wrong with an adult male who punches doors, threatens other men, and has a self-confidence level of nine million (on a scale of one to 10, of course) that should not be tolerated. Chad has said time and time again that he isn't there to make friends — cliché but extremely true in his case — but there's a difference in not caring to make friends and not caring to respect another group of men.

In the defense of Chad — who I identify with on the deli meat and West Side Story scale of things — it is him vs. the house (with the exception of Daniel, which — you know — doesn't really matter). He has become the victim of a gang up in the house, which could very well be escalating his behavior.

Still, violence is never the answer. I respect a man who doesn't put up with sh*t from other people, but this is only Week 2. If he's already having this many problems with the guys, then there are some major red flags. Plus, if things turn violent? Well, that's not a man. That's a boy who is working out his anger issues.

JoJo doesn't deserve that type of behavior in a partner. She needs someone who can respect other people and take care of confrontation in a mature matter. At this point in the show, Chad does not seem to be that guy. Maybe he'll snap out of his ways, but if not — Chris Harrison, will you please do the honor of showing him to the front door?