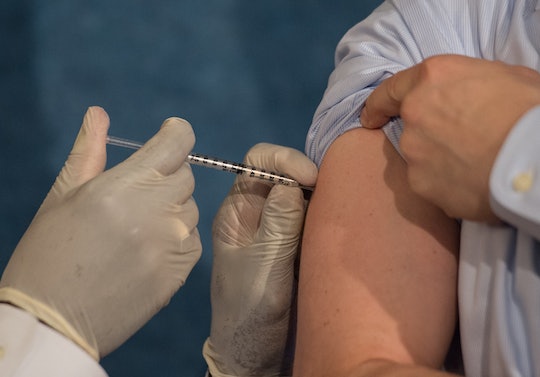 Should Children Get The Flu Shot? This Boy's Death Is A Reminder That The Shot Saves Lives

Flu season is almost upon us, but even though a vaccine exists to lower the risk of serious complications from the virus, many people choose to forego the seasonal shot for themselves and their kids. Should children get the flu shot? Parents Joe and Serese Marotta say yes. After their 5-year-old son, Joseph, died in 2009 after contracting the H1N1 flu virus, they've begun sharing his story to let parents know that healthy kids can absolutely die from the flu, and that the flu vaccine is their best option for protection.

According to TODAY Parents, Joseph Marotta first became ill in October 2009. He'd started kindergarten only one month before, and both he and his older sister, Emma, were up to date with their vaccinations, including the seasonal flu shot, which he'd received earlier in the year. But the H1N1 strain hadn't yet been included in that vaccine — the "Swine Flu" pandemic hit that flu season and was a new strain that hadn't been anticipated — and less than two weeks after Joseph first became ill, he died from sepsis, despite having been in the ICU receiving antibiotic and antiviral treatment. He was one of 282 children who died from H1N1 that year, according to NBC News, and had otherwise been a normal, healthy kid.

The Marottas have since become major advocates for the seasonal flu vaccine. Even though it couldn't keep their own son from dying (scientists have to estimate which strains are likely to be most virulent each season, which means some years' vaccines are more or less effective than others), the vaccine can reduce the risk of getting the flu by at least 50 percent, according to TIME. And that is pretty significant, given that the flu sends approximately 200,000 Americans to hospital each year, according to The Wall Street Journal.

But it's not just children like Joseph who should get the flu vaccine. Certain populations, like the elderly, are at a higher risk of serious complications if they contract the virus, and pregnant women are also more vulnerable. According to the Centers for Disease Control, only about 50 percent of pregnant women in the United States get the seasonal flu shot, despite being more likely to suffer severe complications from the virus, as well as being more likely to die from it. The flu can also lead to premature delivery, putting the baby at risk. But the flu shot doesn't just protect mom and baby during pregnancy — it also offers protection for up to 6 months after the baby is born. And since infants under 6 months are too young to get the flu shot themselves, that means they'll be less vulnerable than infants whose mothers passed on the vaccination.

Experts agree that the flu shot is safe, and the most effective option available, despite not being perfect. As a result, the CDC recommends that everyone 6 months or older get a flu shot each year, unless they have certain contraindications, like a severe allergy to any of the ingredients used to make the vaccine, or if they've ever had Guillain-Barré Syndrome. And unfortunately, those who have relied on the nasal spray version of the vaccine in years past will have to get the injection this year in order to be protected: according to The Wall Street Journal, FluMist is no longer recommended, as studies have shown it has become almost completely ineffective in recent years. Compared the the injection, which offered an estimated 63 percent reduction in flu risk during the 2015/2016 flu season, FluMist offered only a 3 percent reduction, according to a CDC study. That's bad news for parents, many of whom opted for the spray to due to circumvent kids' fears about needles, but for now, it sounds like the injection is definitely the best way to go.

But according to the Centre for Pediatric Pain Research, the Canadian organization behind the "It Doesn't Have To Hurt" campaign, parents can take steps to make flu shots — and other potentially scary procedures — less upsetting and painful for children. Distraction techniques like using bubbles or stickers can help lessen anxiety, as can taking deep breaths for relaxation. And numbing cream applied to the area beforehand can help make the experience less uncomfortable. Even though no parent wants to put their child through what can sometimes be the misery of getting a shot, the science behind the flu shot suggests that the benefits of getting it far outweigh the downsides. And in some cases, getting the flu shot can literally save lives.