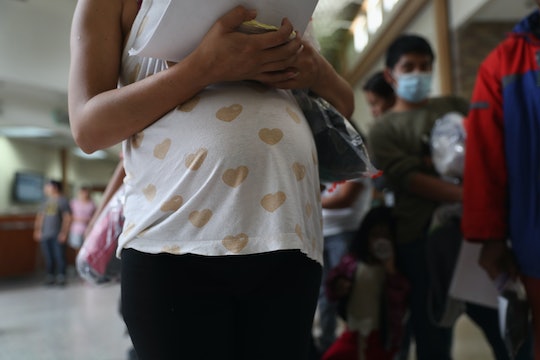 The discovery of locally-transmitted cases of the Zika virus in the continental United States has been concerning for a lot of people, but for pregnant women living in Florida, the threat feels very real and very scary. With two areas of southern Florida now considered to be active Zika zones, local obstetricians are recommending their patients to take extra precautions during their pregnancies to avoid mosquito bites. Should Florida pregnant women stay indoors? Doctors are currently recommending that covering exposed skin and wearing bug spray should be enough to keep them safe, but many nervous women are choosing to stay in their homes as much as they possibly can to further minimize their Zika risk.

According to CNN, the Centers for Disease Control's recent announcement that pregnant women and their sexual partners should avoid all non-essential travel to Miami-Dade County, where Zika is a concern, has left many pregnant women actually living in the area extremely nervous about going outside. Dr. Karla Maguire, a pregnant obstetrician in south Florida who is due in February, says that even she is leery of going outdoors, and only does so to go to work — wearing long sleeves and pants, and covered in bug repellent. While staying indoors isn't something all experts agree pregnant women should do, it's something Maguire fully intends on continuing until her baby is born, and she certainly isn't the only one.

The fear, of course, is not necessarily that the Zika virus could be dangerous for the women themselves — as much as 80 percent of people who contract Zika will likely have no symptoms at all — but that the virus can lead to devastating birth defects like severe microcephaly. According to the CDC, microcephaly causes an abnormally underdeveloped head, which leads to a variety of different developmental complications. With no vaccine readily available, or other sure-fire way to prevent it, pregnant women are left trying to avoid getting bitten by mosquitos as much as they possibly can.

According to The New York Times, the arrival of the Zika virus in Florida has even led some pregnant women to consider drastic measures to keep their unborn babies safe, like quitting their jobs so they can stay home entirely, or even leaving the state of Florida all together until their babies are born. As Miami-Dade OB-GYN Dr. Elizabeth Etkin-Kramer noted, "patients are very anxious, and they bring up the subject of Zika with me before I even get a chance."

The CDC's current recommendations for anyone living in or traveling to areas with Zika is to prevent mosquito bites by covering exposed skin with clothing, use condoms during sex, and to wear EPA-registered insect repellents that contain either "DEET, picaridin, IR3535, or oil of lemon eucalyptus or para-menthane-diol" as the active ingredient. The CDC also recommends that individuals "stay and sleep in screened-in or air-conditioned rooms," but have stopped short at recommending they never go outside, or that they leave the area completely — likely because, for many women, that's just not possible.

And, of course, even women sequestered in their homes for their entire pregnancies are not 100 percent protected from the Zika virus, given that all it would take is one infected mosquito finding a way into their homes. According to The Wall Street Journal, pregnant Florida mom Katrina Barnard has nixed all outdoor activities because of Zika, and she and her other pregnant mom friends have shifted to having playdates exclusively indoors. She described "slathering herself in DEET" and literally "[running] from point A to point B," if she must go outside, because the threat of mosquitos feels so intense. Barnard explained,

[Pregnant women] worry about mercury in fish. No soft cheese. Don’t eat the sushi. Don’t drink the wine, and now it’s don’t go outside because your baby could be born with microcephaly.

Barnard's fears honestly seem totally understandable given the high stakes involved, but what happens when you don't have the option to spend most of your time indoors? Broward County OB-GYN Dr. Aaron Elkin told The New York Times he still recommends bug spray, long sleeves, and condoms for prevention, and that women don't necessarily have to take drastic measures to protect themselves and their babies. Though with so much still unknown about Zika's effect on fetuses, and zero guarantees when it comes to avoiding the virus completely, it makes total sense that mothers would still be very worried. And until the virus is able to be completely contained — or until their babies are born — those worries are not likely to dissipate anytime soon.