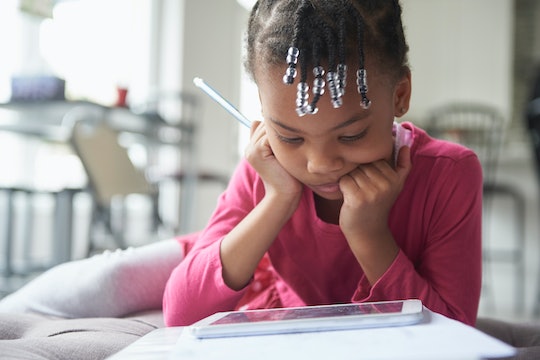 Should Kids Be Held Back Next School Year? Experts Explain

I have learned through this pandemic that I should never be allowed to homeschool my children. My kids are suffering academically due to my gross ineptitude, and the whole thing has me wondering if I should hold my child back next year. I mean, it seems reasonable, right?

More Like This
What To Do & Say When Your Child Says They Hate School
These 23 Teacher Appreciation Week Instagram Captions Will Show Your Appreciation
18 Best Sand Toys In 2021 For Babies, Toddlers, & Kids
15 Face Masks For Kids That Are Cute, Comfortable, & Get The Job Done

I contacted educators, psychologists, and occupational therapists all across the country and found that while there are some who would be open to considering it, it is overall not a popular opinion. Developmental psychologist Dr. Marion Blank cautions parents that the risks of holding your child back a year heavily outweighs the benefits. "Studies of long-term outcome indicate that the results are generally not positive," she tells Romper. "Children's self-esteem plummets, causing a negative impact on both academic achievement — particularly reading and math — and on socio-emotional adjustment in terms of peer relationships and problem behaviors." These are genuine concerns parents might have.

When I ask Blank if she thought that the metrics might shift due to increased numbers of students being held back, she says, "It would depend on how the issue is handled by the system — so that a child would not feel singled out. But we have no history or precedent for this type of action, and the likelihood of chaos and mismanagement is great."

Additionally, she worries that it would create a new type of two-class system — those who "had" to be held back, and those who were promoted forward. "My sense is that it would be far more productive and efficient to have schools determine how to offer the 'missed material,'" she says, whether that be through tutorials, extra class hours, computer assignments, or something else. And to be fair, I know that both of my kids' schools are working toward just that. They have been transparent in their expectations for the next few school years that there will be some level of relearning going ahead, and that parents and teachers will have to work together to determine the best path forward.

Should you hold your child back a year in school after this year if you just know that they aren't doing well? Meredith Essalat, who has been an educator for over 17 years supporting secondary and elementary school students as a teacher and now principal in San Francisco, California, tells Romper, "This is not the time to retain students. This is the time for concentrated, targeted efforts when it comes to getting kids caught up in the fall." She also says that it's up to the schools and school districts to look for ways to "remediate their students in the moment without punishing them by holding them back for circumstances that were out of their hands."

Essalat has taken this side because of the long-term effects that Blank mentioned. Since we don't know how this will pan out, these educators argue that the best path forward is through the sludge and into the next phase. It's not going to be pretty — we already know that — but perhaps we as parents just need to slug on and go. We feel like we're doing terribly, and heck, maybe we are. We are new to this, but schools are going to account for this and reassess. And it sounds like educators are right there to help lead the way.