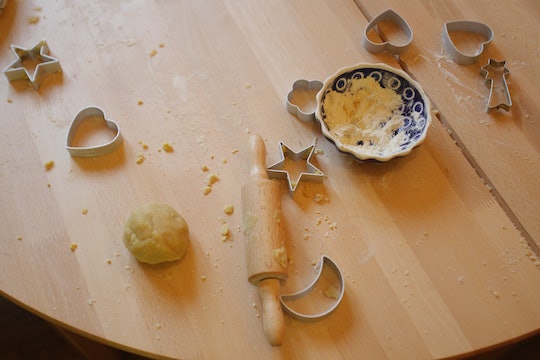 Should Kids Eat Cookie Dough? The FDA Says Parents Should Be Especially Cautious

For adults and kids alike, it can be very, very tempting to sneak a quick spoonful or two of cookie dough, or eat it right out of the tub, with your hands. It's an amazingly scrumptious treat, especially during the summer when it's too hot to bake. It's sweet, and a little salty, and a little melty. Basically, it's the perfect food (just try and debate that!). But, a recent announcement from the Federal Food and Drug Administration (FDA) is giving parents some pause. Should kids eat cookie dough? The FDA says that it's unsafe, and the organization has effectively ruined summer for everyone.

The FDA and the U.S. Centers for Disease Control and Prevention released a statement on Thursday warning consumers not to eat cookie dough or any kind of batter due to a recent outbreak of E.coli bacteria in some batches of flour. They wrote:

People often understand the dangers of eating raw dough due to the presence of raw eggs and the associated risk with Salmonella. However, consumers should be aware that there are additional risks associated with the consumption of raw dough, such as particularly harmful strains of E. coli in a product like flour.

The CDC and FDA went on to say, "The varieties include unbleached, all-purpose, and self-rising flours. Flour has a long shelf life, and many people store bags of flour for a long time. If you have any of these recalled items in your home, you should throw them away."

According to CNBC, General Mills had a voluntary recall of nearly 10 million pounds of flour because of the possibility of the spread of E.coli. The flour was distributed under a variety of brand names, including Gold Medal, Signature Kitchen's, and Gold Medal Wondra. Despite that warning, the FDA reported that several people have already gotten sick due to eating raw dough from a General Mills plant in Kansas City, Missouri.

The specific strain of E. coli that is being spread is called the Shiga toxin-producing E. coli, the FDA reported. Symptoms of contracting an infection from the bacteria include diarrhea and stomach cramps. Though most people recover from this kind of food poisoning in about a week, there can be more serious complications. Some may experience kidney failure as a result of the infection, and, while it can happen at any age, it's especially prone to affect kids under five and the elderly. Because of that risk, it's especially important for parents to keep their children away from cookie dough while this recall is in effect.

The FDA also warns that it's not just ingesting flour that's dangerous; handling it can also spread E.coli. On its site, the FDA warns strongly against parents letting their kids play with dough or "flour crafts." No matter how delicious and fun dough may be, parents should keep their kids away from it for the time being. Luckily, cookie dough ice cream is still safe (if you need a fix in the interim).